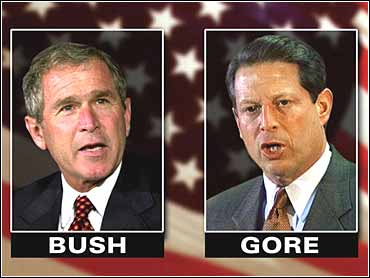 Within the next two weeks - and maybe as early as next week - George W. Bush will announce his vice presidential running mate. Al Gore will follow closely on Bush's heels with his own choice. The announcements are due ahead of the GOP and Democratic conventions.

"It smells to me like he's about a week away," Oliphant said on Bush's timeframe for choosing a running mate. That would mean the choice could come days ahead of the beginning of the Republican convention in Philadelphia.

"He doesn't have a big-time national figure to choose from," Oliphant said, since Arizona Sen. John McCain and Colin Powell do not appear to be interested in the job.

As for Gore, Oliphant said "There are a couple figures of national stature who may still be in this game."

As for lesser-known Democrats, Florida Sen. Bob Graham got a public tryout, speaking alongside Gore over the weekend.

"I think he is one of those people lusting for the office who would probably take out the trash at the White House - in addition to sitting at meetings - if he were picked," Oliphant said.

Gore could pose a threat to Bush in Florida, home state of Jeb Bush, if he selected Graham, though analysts say the vice president needs to shore up a swing state in the Midwest with his choice for a running mate. Conversely, Bush could challenge Gore in New York - thought to be a Democratic lock - if he selected Pataki, one of the Empire State's popular Republicans.