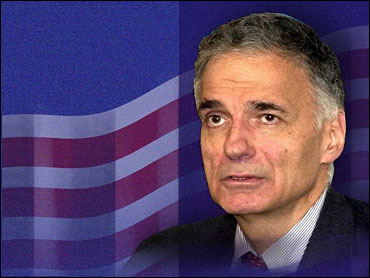 
Public Enemy Number One for the vast majority of Democrats is George Bush. Ralph Nader, liberal icon, occupies the second slot on the enemies list. Something is wrong with that picture.

Nader is thinking about running for president again. That has provoked a nasty, vehement, righteous barrage of opposition from liberals, progressives, Democrats and assorted Bush-haters afraid a Nader campaign could help re-elect Bush. Their anxiety may be understandable, but the shut-Nader-up campaign is appalling.

Why? Because Nader is not to blame for the fact that Al Gore is not president. Because I believe vigorous, high profile third-party candidacies (as high profile as third parties get in this country, that is) are good, even crucial for the political system. Because skilled political mischief-makers capable of occasionally piercing the homogenized, focus group tested, corporate sponsored claptrap of the two big parties are a rare godsend. Because more voices are better than fewer voices.

If people oppose Nader and are committed to Anybody But Bush, they should give money or time to the Democrats. People who complain about the rightward drift of the Democratic party shouldn't and the importance of free, diverse political speech shouldn't be working to keep Nader off the ballot and the big stage.

After a long conversation with him, I believe Nader wants to run. He says he'll decide by the end of February. He won't hook up with the Green Party this time. The key factors in his decision are whether he thinks he can get the volunteers and money to mount a 50 state campaign. "The money is a problem," he said. Backers in 2000 have abandoned him, with a vengeance.

Money is a problem not just for Nader but for the network of public interest and consumer groups he invented. Public Citizen, the biggest group Nader founded, lost 20 percent of its membership and $1 million in donations after 2000. (Full disclosure: I worked for Public Citizen writing a book on federal tax policy in 1984.) That's a sign of just how thoroughly some people blame Ralph Nader for the sins of Al Gore, George Bush and the United State Supreme Court.

But this is pure scapegoating. It's emotional.

In 2000, Gore could have won his home state like almost all the other candidates in U.S. history have. He could have waged a semi-competent campaign and won New Hampshire, Ohio, Arkansas and Florida, handily. The Supreme Court could have ruled for Gore. Nader spent two and a half days in Florida in 2000, but it's his fault we went to war in Iraq? Right.

Nader says the "liberal intelligentsia touts itself as the most tolerant voice in America." But with their rabid demand for him not to run, "They're crossing from opposition to censorship." He understands some of this. "They are desperate to replace Bush, " he said. But he is mystified as to why their opposition is so, well, rabid. He is particularly dumbstruck by an open letter in the Nation magazine, supposedly the leading voice of dissent and civil liberties in the leftie world, commanding him to not run. There's a Web site devoted to keeping him out of the race. A Stanford law professor and blogger named Lawrence Lessig likens Nader to the tobacco and auto executives he's famous for attacking. He's being vilified.

I don't understand the degree of the hostility. Nader doesn't seem to either. He thinks it has something to do with the Left's inferiority complex. Fear of a Nader run, he speculated, shows "how low liberalism's self-esteem has sunk, how low its expectations are."

Nader believes that his campaign would help unseat Bush. Go ahead, chortle dismissively. I think he 's right. Nader talks about "field testing" lines of attacks, rhetoric, issues that the Democrats are too timid to use.

Perfect example: A few weeks ago Michael Moore, appearing with the dearly departed General Clark, called Bush a "deserter." This was deemed not kosher; Clark was urged to denounce the gadfly and apologize to his Highness. Well, it might not be by the Marquis of Queensbury's rule of politics, but President's Bush National Guard service is now a huge issue and it has tapped into some people's concerns about his moral authority to be a "war president."

Nader believes another campaign would bring some people into politics, perhaps into the Democratic column in November, and wouldn't scare any voters off. He wants attention focused on issues he thinks Democrats are too cautious on: poverty, corporate crime, minimum wage, regulation, campaign finance reform and media consolidation.

Fundamentally, Nader believes that ballot-access and campaign finance laws that discourage third parties are a serious civil liberties issue, an issue not close to the radar screens of the established civil liberties groups. He is outraged the big boys kept him and Pat Buchanan out of the debates in 2000. They will do so again if he runs this year. It simply galls Nader that only two teams get to play in the big tournament. It's not in his nature to just take it without a fight.

I think the zealousness of Nader-phobia reflects a larger rage and ugliness that has infected both sides of this narrowly and bitterly divided electorate (an infection I have written about ad nauseum, I know). If you're not with us, you're against us and we hate you. Clinton-haters. Gore-haters. Bush-haters. Not opponents, haters.

But it is precisely in times like these when dissident voices -- Right, Left, Radical Center -- are especially important. The electorate is divided, yes, but a huge slice of the population is simply alienated from politics and government altogether. And these voters, or non-voters, are better served when they can cast loud protest votes. Sometimes these votes are so loud that a Jesse Ventura becomes a governor. Minnesota survived.

In response to Lessig's insults on his blog, someone posted a message supporting Nader that said many people "feel betrayed, abandoned, and utterly unrepresented. I refuse to turn the act of voting into a choice between the lesser of two evils. That's exactly what the 2000 elections appeared to be, and I pray that the 2004 elections will be different." Two parties, nearly as similar as Coke and Pepsi, don't satisfy all consumers.

Third parties and independent candidates have served the country pretty well over. If John Breckinridge hadn't run as a Southern Democrat in 1860, Abraham Lincoln might not have been elected. I think Perot, Buchanan, John Anderson and Nader spiced up the national debate.

I hope Nader runs. I hope someone to the right of Bush runs too. More is better. Run, Ralph, Run.

A Tragic Loss Of Innocence

50 Years Later: A Promise Not Kept