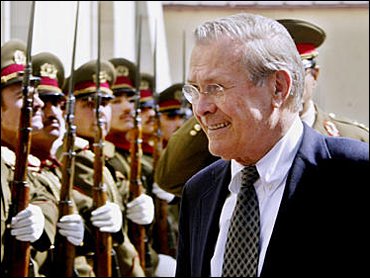 Defense Secretary Donald H. Rumsfeld said Thursday terrorists are on the run but that he could not say precisely what the prospects are for capturing al Qaeda leader Osama bin Laden.

"It will happen when it happens, and I don't believe that it's closer or farther at any given moment," said Rumsfeld, who held talks in Kabul with Afghan President Hamid Karzai. The Pakistani offensive, taking place near the Afghan border, has had some effect on al Qaeda there, he said.

"Clearly there's pressure being put on terrorists all over the world, but most recently, and certainly with a great deal of energy and some success in Pakistan, for which we are very grateful," said the secretary.

Rumsfeld declined to say whether the Pentagon was shifting more special operations forces from Iraq to Afghanistan to aid in the hunt for bin Laden.

"The world will be a better place when he is captured or killed," Rumsfeld said. "That is the goal of a great many nations."

For his part, Karzai declared the Taliban defeated and suggested that much of the violence in his country is caused by criminals rather than guerrilla holdouts.

But neither he nor Rumsfeld, who appeared together at a press conference at the Afghan presidential palace, offered any specific hope that the U.S.-led coalition would capture bin Laden soon, despite a fresh offensive in neighboring Pakistan.

Karzai's statements on the Taliban, the former rulers of Afghanistan and bin Laden's native ally, were some of his strongest yet, however.

"The Taliban as a movement does not exist any more," he said. He said former Taliban members and leaders are frequently approaching his government to seek permission to return home.

Karzai said they could, as long as they were not members of al Qaeda and not committed terrorist acts.

Rumsfeld, visiting Afghanistan on a weeklong trip to U.S. allies in Asia, seemed to agree.

"I'm not seeing any indication the Taliban pose any military threat to Afghanistan," Rumsfeld said. "This country has gone in a short period from a haven for terrorists to a coalition ally in the war against terrorism."

Karzai acknowledged that some Taliban holdouts remain a threat, but suggested that common criminals are the cause of much of the violence.

"Now every act committed by a Kalashnikov is not an act done by the Taliban or al Qaeda," Karzai said.

The Taliban is strongest in south-central Afghanistan, in the region around Kandahar. Al Qaeda is concentrated to the north, along the Afghanistan-Pakistan border, where bin Laden is thought to be hiding, U.S. military officials said.

Guerillas who serve Gulbuddin Hekmatyar, located to the north of Jalalabad, also are a threat, officials said.

During his visit to Afghanistan, Rumsfeld also traveled to the former Taliban stronghold of Kandahar, where he met with a graduating class of Afghan police and a U.S. military reconstruction team.

The victims were from an Afghan aid group called FBF and were working on projects to rebuild the rural economy, devastated by more than two decades of violence.

More than two years after the fall of the Taliban, much of the country is still vulnerable. More than 100 people have died in violence this year, including aid workers and government employees as well as foreign and Afghan security forces.

Attacks have come mainly in the south and east of the country, but the capital and the far west also have been targeted in recent weeks, raising doubts about plans for landmark national elections this summer.