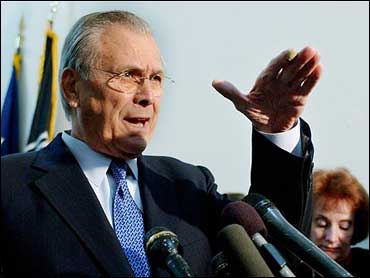 Defense Secretary Donald H. Rumsfeld said Thursday he expects some 20,000 U.S. troops to return home from Iraq after next week's elections, and he suggested that some of the remaining 137,000 forces could pull out next year.

"If conditions permit, we could go below that," he said in the latest administration hint of at least a modest reduction next year.

The Pentagon chief also said he believed the White House and Sen. John McCain, R-Ariz., would "end up working something out" during negotiations over legislation standardizing interrogation techniques and banning mistreatment of foreign terrorism suspects in U.S. custody.

Rumsfeld made his comments between closed-door meetings on Capitol Hill with House members, part of an effort by the Bush administration to communicate better with Congress about the war. Gen. Peter Pace, chairman of the Joint Chiefs of Staff, also attended.

Facing diminishing public support on Iraq and pressure from constituents, lawmakers from both parties have complained that the administration must give them more information on Iraq.

Later, Republican lawmakers went to the White House to hear from President Bush, Rumsfeld, Pace, the U.S. ambassador to Baghdad and top military commanders in Iraq.

White House press secretary Scott McClellan said more briefings were planned for next week, and would include Democrats as well as Republicans from the House and Senate.

McClellan also rebuffed critics of Mr. Bush's war policy, saying there was "disarray and disagreement" in the Democratic Party over how and when to get out of Iraq.

In New York, Sen. John Kerry, D-Mass., said, "The current administration confuses examination of failed policies with an admission of weakness, and debate with division," resulting in the lack of a real debate to "forge a winning strategy for America."

For his part, Rumsfeld said if next week's elections in Iraq go well he expects U.S. troop levels, which were boosted to nearly 160,000 this fall for elections, to return to the 137,000 level of summer.

"The hope is that the conditions will permit some drawdowns in troops," he said.

The Pentagon chief said the number of forces could fall below 137,000 next year depending on conditions, the recommendation of senior U.S. commanders and the president's final determination.

On the issue of detainee treatment, Rumsfeld said negotiations between the White House and McCain were continuing in hopes of reaching a compromise that would satisfy administration concerns.

"I haven't seen the latest draft, but my guess is they'll end up working something out," Rumsfeld said.

The Senate overwhelmingly supports the provisions and included them in its two defense measures. The House measures omit the provisions, and congressional negotiators are trying to work out final bills.

But negotiators were still trying to iron out differences over a Senate-passed provision on prosecuting detainees at the U.S. naval base at Guantanamo Bay, Cuba. Hunter wants to furthur limit the way they can challenge their detention.

The White House tried to kill the McCain provisions, but later switched gears and sought an exemption for covert intelligence agents. However, McCain rejected that.

In recent days, Mr. Bush's national security adviser, Stephen Hadley, has been seeking some protection from prosecution for agents, in some cases, who are accused of violating the McCain provisions.

Arguing that the proposal would undermine the intent of his legislation, McCain has offered to include language similar to that in the Uniform Code of Military Justice. It would allow accused people to defend themselves if a reasonable person could have found they were following a lawful order about treating detainees.

But the White House isn't satisfied with that, and McCain, congressional aides say, has enough support in the House to stand his ground and insist on his provisions.

Also Thursday, Rumsfeld dismissed news reports that he plans to step down. "Those reports have been flying around since about four months after I assumed my post" in 2001, Rumsfeld said, adding, "I have no plans to retire."

too much of a lightning rod (video)
.

Nevertheless, names for a replacement were being thrown around Washington. They included Sen. Joe Lieberman, D-Conn., who has supported the administration on Iraq, and who had breakfast with Rumsfeld and Pace on Thursday.

Lieberman has been courted by the Bush administration before, reports Borger, noting the Connecticut senator's rejection of the Homeland Security Department's top job and the role of U.N. ambassador.

One top administration official tells Borger that, "I think Senator Lieberman has gained a great deal of respect around here. They would like to see him in a job in the administration." However, Borger adds, that Senate Democrats believe a move to the Bush cabinet will not happen.