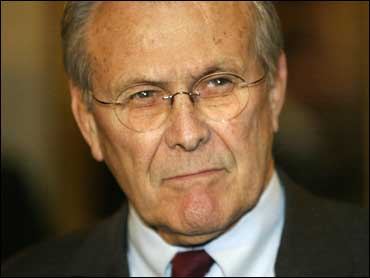 U.S. Defense Secretary Donald Rumsfeld on Saturday urged the world to work for a "diplomatic solution" to halt the nuclear program of Iran, a nation he called the "leading state sponsor of terrorism."

According to prepared remarks for delivery at an international defense conference, Rumsfeld said the U.S. stands "with the Iranian people, who want a peaceful, democratic future."

"The Iranian regime is today the world's leading state sponsor of terrorism," he said. "The world does not want, and must work together to prevent, a nuclear Iran."

Meanwhile, In Vienna, Austria, the International Atomic Energy Agency declared that Iran's breaches of the nuclear nonproliferation treaty and a lack of confidence that it is not trying to make weapons are linked to a decision to ask for Tehran's referral to the U.N. Security Council, according to a draft resolution made available Saturday to The Associated Press.

Rumsfeld painted a stark picture of a lengthy war against terrorism that lies ahead, appealing to allies to show unity and increase military spending to defeat the threat of a "global extremist Islamic empire."

Rumsfeld said terrorists hope to use Iraq as the "central front" in their war, turning it into a training and recruitment area like they had done in Afghanistan under the Taliban. He warned "a war has been declared on all of our nations" and said their "futures depend on determination and unity in the face of the terrorist threat."

On Friday, Iran said it no longer would consider a Kremlin proposal to move its uranium enrichment program to Russia if it is referred to the U.N. Security Council over suspicions it might be seeking nuclear weapons.

If Iran's nuclear file goes to the Security Council, "there will be no way we can continue with the Russian proposal," said Javad Vaeidi, deputy head of the powerful National Security Council and a top nuclear negotiator.

Rumsfeld was to follow German Chancellor Angela Merkel in the opening speeches on the second day of 42nd annual Munich security conference, a prestigious gathering in southern Germany, which defense experts and policy-makers traditionally use for frank exchanges.

The conference is focused on the trans-Atlantic relationship between the U.S. and Europe.

Rumsfeld said violent extremism is a danger faced as much in Europe as in the United States.

"The struggle ahead promises to be a long war that will cause us all to recalibrate our strategies, perhaps further adjust our institutions, and certainly work closely together," he said.

He said Islamic militants are on the move and have to be checked.

"They seek to take over governments from North Africa to Southeast Asia and to re-establish a caliphate they hope, one day, will include every continent," he said. "They have designed and distributed a map where national borders are erased and replaced by a global extremist Islamic empire."

But he added a note of hope. Likening the war on terror to the Cold War, Rumsfeld said the battle could be won if nations persevered. He invoked Merkel's own experience, growing up in Communist East Germany to become chancellor of a unified Germany.

"Freedom prevailed because our free nations showed resolve when retreat would have been easier, and showed courage when concession seemed simpler," he said.

But, he pointed out that the U.S. spends 3.7 percent of its Gross Domestic Product on national defense while 19 of the 25 other NATO nations spend less than 2 percent of their GDP on defense.

He did not name countries, but Germany, which spends 1.4 percent of its GDP on defense, and others have been under pressure to step up their funding.

"It may be easier for all of us to use our scarce tax dollars to meet urgent needs we all have at home," Rumsfeld said. "But unless we invest in our defense and security, our homelands will be at risk."

The IAEA's move Saturday came after Washington compromised on a U.S.-Egyptian dispute over linking fears about Tehran's atomic program to a Middle East nuclear-free zone, and indirectly to Israel. Diplomats said the Americans accepted mention of such a zone in the draft late in the night.

Diplomats told The Associated Press that the text had been formally submitted and that meant the IAEA board would likely decide on referral when it reconvenes later Saturday.

A majority of board members back referral but possible delay had loomed after United States and Egypt tangled over indirectly linking calls on Iran to dispel suspicions to about its atomic ambitions to long-standing Arab demands that Israel, generally considered a nuclear power, give up such arms.

Diplomats familiar with the issue said France, Britain and Germany; the three European nations formally submitting the U.S.-backed draft resolution calling for referral, had mediated between Cairo and Washington.

The diplomats, who demanded anonymity in exchange for discussing the negotiations, said the Americans finally accepted a paragraph stressing the importance of a nuclear free zone in the Middle East early morning Saturday

A Western diplomat at the meeting said the United States felt strongly about not linking its ally Israel to nuclear concerns in the Middle East when it considers Iran the real threat in the region. But the Americans agreed in the face of overwhelming support for inclusion of such a clause from European allies spearheading the resolution on referral

Egypt, whose support of the resolution is key to swaying other Arab board members to join in backing it, was looking to make the linkage to satisfy broad domestic concerns, a senior European diplomat said.

Support for Iran at the Vienna meeting appeared to be limited as the clock ticked down on the issue of referral. Cuba, Venezuela, Syria and a few other countries represented at the IAEA board meeting remained opposed. India was said to be leaning toward supporting referral.