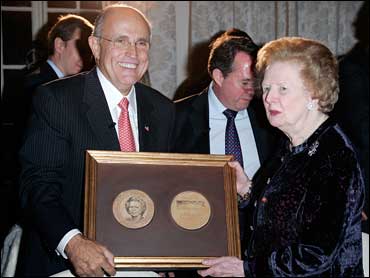 Republican presidential candidate Rudy Giuliani bragged about his international celebrity Wednesday on a trans-Atlantic campaign trip in which he schmoozed with conservative idol Margaret Thatcher.

"I'm probably one of the four or five best known Americans in the world," Giuliani told a small group of reporters at a posh London hotel as onlookers gathered in the lobby to gawk at actor Dustin Hoffman who was on a separate visit.

The former New York mayor is the latest GOP presidential candidate to travel to Britain, meeting the country's new political guard and rubbing elbows with Thatcher, an icon for American conservatives.

"This is no time for defeatism and appeasement," Giuliani told a gathering of the Atlantic Bridge, a group that promotes ties between British and American conservatives. "It may be better to put it as Margaret Thatcher might have done - this is no time to go wobbly."

Thatcher, 81, attended the speech at the hotel.

Giuliani told reporters he has made 91 trips to 35 countries in five years and many governments seek him out for advice on security. He was given an honorary knighthood in 2002 by Queen Elizabeth II for his leadership after the Sept. 11 terror attacks.

But who are the four other best-known Americans?

"Bill Clinton ... Hillary," he said, but he was whisked away for another engagement before he could throw out any other names.

At odds with many American conservatives and religious leaders for his support for gun control as well as abortion and gay rights, Giuliani has said the United States needs strong leadership in the future - much like that of Ronald Reagan.

If he became president, he said, he would increase the size of the U.S. military by at least 10 combat brigades, fight Islamic terrorist groups, encourage governments to share intelligence information and push for the further expansion of NATO.

Many have lauded him for his leadership in the wake of the Sept. 11 attacks, which he said few American leaders could have predicted.

"I don't think any president can be faulted for not being a prophet," he said.

That said, however, Giuliani criticized the decision to treat the first attack on the World Trade Center, in 1993, as a crime rather than an act of war. He also said the U.S. government was tepid in responding to the bombings of the USS Cole and U.S. embassies in East Africa.

Giuliani said it would be a mistake to return to the defensive stance against terrorism taken before Sept. 11, rather than mount a robust offense.

He said he would like to boost the size of the U.S. military, and saw no need to do it with a draft.

Giuliani said earlier in the day that as president he would take any action necessary to prevent Iran from becoming a nuclear power.

"That is not said as a threat. That should be said as a promise," he said.

Giuliani followed GOP rivals Fred Thompson and Mitt Romney in coming to Britain for meetings with Thatcher. Dubbed the "Iron Lady" during the Cold War, she is considered a mentor to many conservatives who are trying to distance themselves from President Bush ahead of elections.

"I have a tremendous admiration for Margaret Thatcher," said Giuliani, who was to receive the Margaret Thatcher Medal of Honor at the Atlantic Bridge dinner. "I think she's one of the three people who changed the map of Europe."

Giuliani, who said fundraising was a last-minute addition to his Britain trip, said his credentials go beyond Sept. 11.

"I don't think of Sept. 11 as being my defining experience. I think if it was I wouldn't have been able to handle it," he said.

He said he has as much executive and foreign policy experience as any of his presidential rivals. He cited his work as an associate U.S. attorney general; his Justice Department negotiations with governments and dealings with Interpol; his time as mayor of one of the globe's major cities; and his relationships with dozens of world leaders.

As for convincing Americans that another Republican administration wouldn't be more of the same?

"The reality is when this comes down to an election between two people, it's going to be about those two people," Giuliani said.