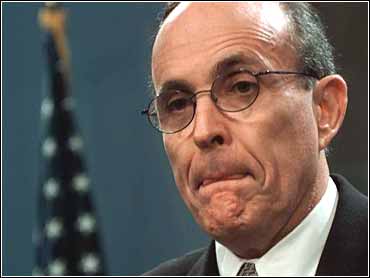 After submitting legal papers in a judge's chambers in the Appellate Division of State Supreme Court, lawyers for Giuliani and his estranged wife, Donna Hanover, were issued an expedited hearing date of June 6 to argue their motion before the court.

The court papers were not made public.

Raoul Felder, the mayor's lawyer, bounded into the courthouse without comment, saying only: "I'm going to work."

A short time later, one of Hanover's lawyers, Victor Kovner, arrived. He explained that the mayor was seeking a stay of last week's lower court order that barred Judith Nathan from Gracie Mansion as long as the mayor and Hanover's two children, Andrew, 15, and Caroline, 11, live there.

At a City Hall news conference, Giuliani declined to discuss the appeal or a New York Post newspaper report that he would strip his estranged wife of her ceremonial duties.

However, Giuliani did not rule out the possibility that he would yank city funding from Hanover's office.

"All those decisions will get made, but I'm not going to discuss it," he said. "I think any discussion that I have of it would be misused or misinterpreted."

Details about the funding and functions of Hanover's office were not immediately available.

State Justice Judith Gische ruled last week that Nathan had to stay away from Gracie Mansion for the next seven months, the duration of the mayor's remaining term.

Kovner said he didn't know whether the mayor's lawyers would attack part or all of Gische's ruling.

"I anticipate that it's the access part," Kovner said. Other parts of the ruling include a rejection of Giuliani's request for a gag order and a timetable for the two sides to agree on how the Giuliani children can be introduced to Nathan.

Hanover continues to live at Gracie Mansion with the children. The mayor uses a guest room.

By SAMUEL MAULL
©MMI The Associated Press. All Rights Reserved. This material may not be published, broadcast, rewritten, or redistributed