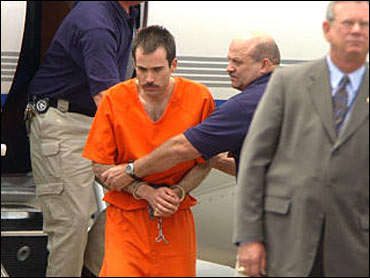 He appeared in court one day after he was flown to Alabama to face trial in the 1998 bombing, which killed an off-duty police officer and severely injured a nurse.

Rudolph faces the death penalty if convicted. He was arrested in North Carolina on Saturday and also faces trial in Georgia for three bombings there, including the attack at the 1996 Olympics.

Evidence gathered after the Birmingham bombing led to Rudolph being identified as the lone suspect in all the explosions, which killed two people and injured more than 150.

Attorney General John Ashcroft said trying Rudolph first in Alabama and then Georgia offers "the best opportunity to bring justice to all of the victims of the bombings and to each community that experienced these attacks."

He predicted the trial would be "relatively short and straightforward."

Rudolph, 36, appeared in federal court in Asheville, N.C., on Monday acknowledging his identity but entering no plea.

Wearing an orange prison jumpsuit with his hands and feet shackled, Rudolph had no comment Monday as he was led into the county jail in Birmingham after five years on the run.

David Luker, who said he will represent Rudolph in Alabama, met with him at the jail but declined comment on whether the bombing suspect maintained his innocence.

It will be late summer, at the earliest, before his case comes to trial, reports CBS News Correspondent Mark Strassman.

Rudolph will be tried for the bombing of the New Woman All Women Health Care clinic in Birmingham. A witness saw a man believed to be Rudolph leaving the scene of the blast. A truck registered to Rudolph was spotted moments later.

In the days after the Birmingham bombing, agents searching a storage locker rented by Rudolph found nails like those used to bomb the clinic and an Atlanta building that housed an abortion clinic.

Authorities said the bombs had similarities that also linked them to the Olympic blast, which killed one person and injured more than 100, and the bombing of a lesbian bar in Atlanta.

"It's really the Birmingham case that broke things open," said Doug Jones, who was U.S. attorney in Birmingham at the time.

Rudolph's North Carolina attorney, Sean Devereux, said his client was innocent. Devereux said Rudolph, who is believed to have been a member of a white supremacist religion, seemed to be a "reflective individual."

"If I didn't know what I know about this case and having spent about two hours with him, I would never believe that he would hold any kind of radical beliefs," he told reporters.

He also said Rudolph told police the location of his campsite in western North Carolina, where he is believed to have hidden for the past five years before he was captured Saturday while scavenging for food behind a supermarket.

Rudolph had been on the FBI's 10 Most Wanted list, and the government had offered a $1 million reward for information leading to his capture.

Rudolph signed a handwritten statement Sunday refusing to answer questions without a lawyer present, court documents show. On a form requesting a public defender, Rudolph described himself as single, unemployed since 1997 and broke.

Rudolph will await trial at the Jefferson County Jail, where he will have access to a telephone, television and table but will not be allowed contact with other prisoners because of the high-profile nature of his case, said sheriff's Deputy Randy Christian.

"He will be held in isolation with 24-hour video surveillance. We will personally check him every 15 minutes," Christian said.

The courtroom audience in North Carolina included Felecia Sanderson, whose police officer husband, Robert "Sande" Sanderson, was killed by the explosion in Birmingham. She had no comment.

A law enforcement source who spoke on condition of anonymity said Monday that investigators were making progress in figuring out how Rudolph stayed alive and in such good health. Authorities want to know if the former fugitive got any help from residents.