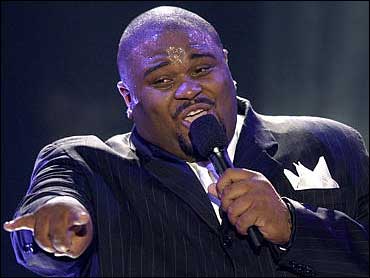 As the saying goes, "Behind every great man, there's a great woman." In many cases, that special lady is his mother.

In The Early Show's "Mom Rocks" series, we've been looking at how our favorite pop stars are influenced by their moms. This weekend, we profile "American Idol" winner Ruben Studdard and his mother, Emily.

Ruben won big time when he was rewarded with a recording contract after capturing American's heart on the Fox TV singing competition. His mom was right there from the start.

"My mom did a lot," Ruben says. "She really was active in my career, you know, with making sure that I got to places I needed to be, like choir concerts and musicals and plays."

Emily is a little more modest about her role in her son's success.

"I kind of took his lead with things," Emily says. "If he said that he wanted to be in something and I knew that it was legit, I would take him and just be there for him and with him."

Of course his mom recognized his talent at an early age.

Emily says, "The first time I heard him singing in public, we were at a department store. And I think he was about two years old. And a lady asked him what did he learn in preschool that day. And he said, 'My ABC's and this song.' And he sung "We Shall Overcome," and [he] did all the verses. I was just standing back."

From then on, everybody knew he had a special gift. And teachers recognized Ruben's mother was part of his success.

"She let him be himself, and I think that's what make their relationship so close," says Martha Copeland, Ruben's kindergarten teacher. "She doesn't try to lead him or push him in any way, but she does support him."

Ruben says it is important for him to know that the people he is close with, including his mother, are behind him 100 percent.

Ruben's grandmother, Hattie Williams, said he and Emily had a lot of powerful role models. So when marijuana was found in Ruben's tour bus, Emily had the strength to remain calm.

"I just made one phone call," Emily says. "And I said, 'Are you all right and where are you?' And he told me where he was. And I knew that he had no part of that."

Ruben was nowhere near the tour bus in question.

The singer's family has always believed in him and encouraged him to follow his dreams.

"He always said he had a dream," Williams says. "He loved to sing, and he said one day his dream will come true."

It certainly did. In 2003, Ruben was nominated for a Grammy.

"I took my mom to the Grammys because, I think, for her it was kind of like a graduation because I never finished college," he says. "I wanted to take her to something that was important to me musically. You know, it mean to a lot for me to be nominated for a Grammy."

It meant a lot to his mom, too.

Emily says her son taking her to the Grammys was the second sweetest thing he's done for her. The first? Buying her a brand new Ford Thunderbird. Her previous car was a 1983 Chevrolet Malibu, which she used to drive Ruben to the audition for "American Idol."

"My mom has always given to me everything she had," Ruben says. "She worked really hard to make sure I had all the things that I needed. And you know, now it's my turn to give back."

His success is her success, something she never imagined.

"Never in my lifetime would I have ever dreamed that he would just make it so big," says Emily. "Here he is, just one in a million."

And according to Ruben, she's one in a million too.

Ruben gave his mother a message that says, "Mama, I love you. I will always love you. And I thank you for being there for me."