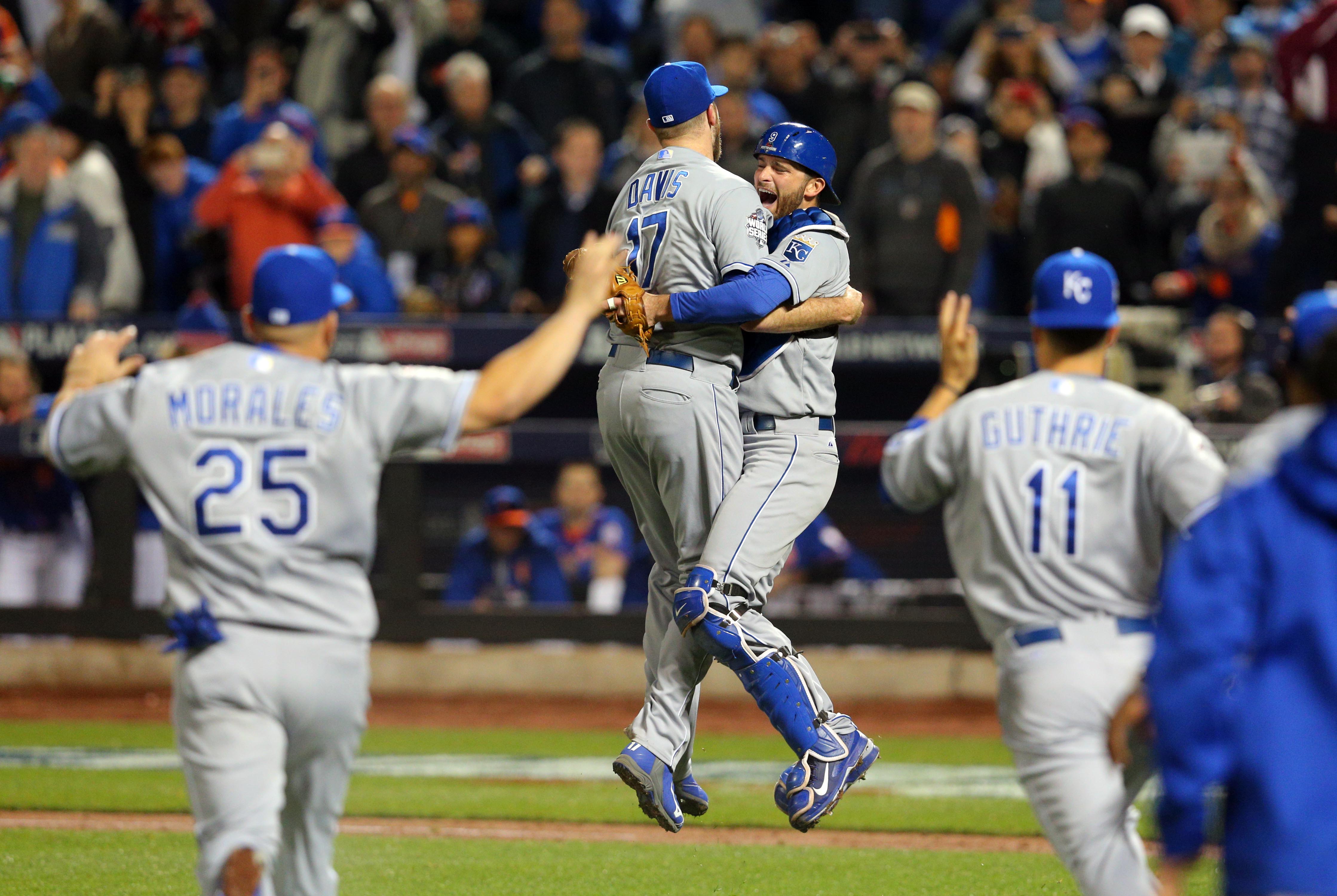 One agonizing step from ecstasy last season, the Royals reign this time after their latest incredible comeback and a go-ahead hit from maybe the most unlikely player in uniform.

Christian Colon singled home the tiebreaking run in the 12th inning and those bound-and-determined Royals rallied one more time to beat the New York Mets 7-2 in 12 innings early Monday for their first World Series championship since 1985 and second ever. The Royals took the Series, four-games-to-one.

Down two runs in the ninth, Kansas City fought back in Game 5 against two of the top arms on the pitching-rich Mets: Matt Harvey and Jeurys Familia.

And the Royals won not with home run power but instead a daring dash from Eric Hosmer, a three-run double by Lorenzo Cain and a couple of crucial stolen bases.

And that's how Series MVP Salvador Perez and the Royals became the first team since the 2002 Angels to come from behind in all four World Series wins, according to STATS. That's how they washed away the bitter taste of last year's Game 7 loss at home to San Francisco, an October heartbreak that drove them to their singular focus all season.

Never waver. Win it all this time.

"Kansas City is No. 1. Who cares about what happened last year?" Perez said.

As CBSSports.com Baseball Insider Jon Heyman put it, "The Royals are as resilient and relentless as they come, and now they are the world champions of baseball. This small-market team with an enormous heart won its first World Series in exactly 30 years by virtue of clever baserunning, a bullpen that doesn't give an inch and an offense that doesn't quit."

Now, this group of homegrown favorites that turned around a floundering franchise, Mike Moustakas and Alex Gordon and Hosmer, can take their place in Royals history alongside George Brett, Willie Wilson, Bret Saberhagen and those champs from 30 years ago.

With no margin for error, Harvey put the Mets' last hope in his hands and hung on as long as he could. After eight scoreless innings, he pushed to pitch the ninth and finally faltered.

"Obviously, I let my heart get in the way of my gut. I love my players. And I trust them," Mets manager Terry Collins said. "It didn't work. It was my fault."

"Unfortunately, I couldn't finish what I started," Harvey said.

New York slugger Yoenis Cespedes exited with knee pain but Curtis Granderson hit a leadoff homer, his third long ball of the Series, and the Mets managed a 2-0 lead against heavy-hearted Royals starter Edinson Volquez, pitching one day after returning from his father's funeral.

"My mom wanted me to pitch, and my dad would want to see me pitch," he said. "It was hard in the first inning for me to stay under control and to not think about my dad."

But for these resilient Royals, no deficit is too large, no time in the game too late.

"We never quit. We never put our heads down," Perez said. "We always compete to the last out."

Perez looped a leadoff single in the 12th off losing pitcher Addison Reed, and pinch-runner Jarrod Dyson stole second. One out later, Colon stepped in as a pinch-hitter for his first plate appearance since the regular-season finale Oct. 4.

Hardly rusty, he lined a 1-2 pitch into left-center and pounded his chest at first base.

All that was left was for Wade Davis to close it out. He threw a called third strike past Wilmer Flores to end it and tossed his glove high in the air as the Royals rushed toward the mound to celebrate.

Hundreds of Royals fans dressed in blue descended toward the Kansas City dugout to cheer their champs. Perez received his MVP award after the catcher hit .364.

'This place was really really loud last night, and after the eighth inning, it got really quiet. You could actually hear the Royals fans over the Mets fans," Royals fan Bill Winn told CBS Kansas City affiliate KCTV from Citi Field.

Later, the Mets came back onto the field to salute a smaller pocket of fans who stuck around for one last chant of "Let's go Mets!"

Fired up all night, Harvey was at 102 pitches following a 1-2-3 eighth and stalked briskly back to the dugout with one purpose in mind. There, cameras caught him telling manager Terry Collins -- in no uncertain terms -- he was going back out for the ninth.

Collins relented, and a huge roar went up as Harvey bounded off the bench and sprinted to the mound, looking for his second complete game in the majors. But he walked Cain on a full-count slider, and Hosmer hit an RBI double.

Harvey was pulled for closer Familia, and Hosmer advanced on Moustakas' groundout to the right side.

So up stepped Perez with the potential tying run 90 feet away, same as last year when he fouled out against Giants ace Madison Bumgarner to end the World Series.

This time, Perez got jammed and hit a slow grounder to third baseman David Wright, who froze Hosmer with a glance and threw across the diamond for the second out.

Hosmer, however, bolted for the plate when Wright released the ball. First baseman Lucas Duda fired wide of catcher Travis d'Arnaud - a good throw probably would have been in time - and Hosmer made a headfirst dive home with the tying run.

Hosmer celebrated with excited teammates, while Familia was saddled with his third blown save of the Series, though two were the result of shaky defense.

For the rising Mets, it was the final stop on a storybook ride. Underdogs in the NL East, they re-energized fans at Citi Field during their first winning season since Shea Stadium was still home in 2008, sweeping the Chicago Cubs for their first pennant in 15 years.

But the Mets remain without a World Series title since 1986.

Flush with young aces who flashed October mettle, New York could be a force for years to come. But first, offseason decisions on two important bats in the middle of the lineup: Cespedes and postseason hitting star Daniel Murphy, whose bat cooled off in the World Series and who made two big Series errors.

"This [Series loss] hurt. There's no doubt about it," the Mets' Wright said. "But when we look on this season, when we get a chance a few days from now, a few weeks from now, to sit down and reflect on what we did to get here, I think it's going to bring a smile to everybody's face."

Meanwhile, in an unusual bit of fortuitous scheduling, the teams open next season with two interleague games at Kansas City in early April.

But first, a parade and victory rally for the Royals in Kansas City on Tuesday, the team and city announced.