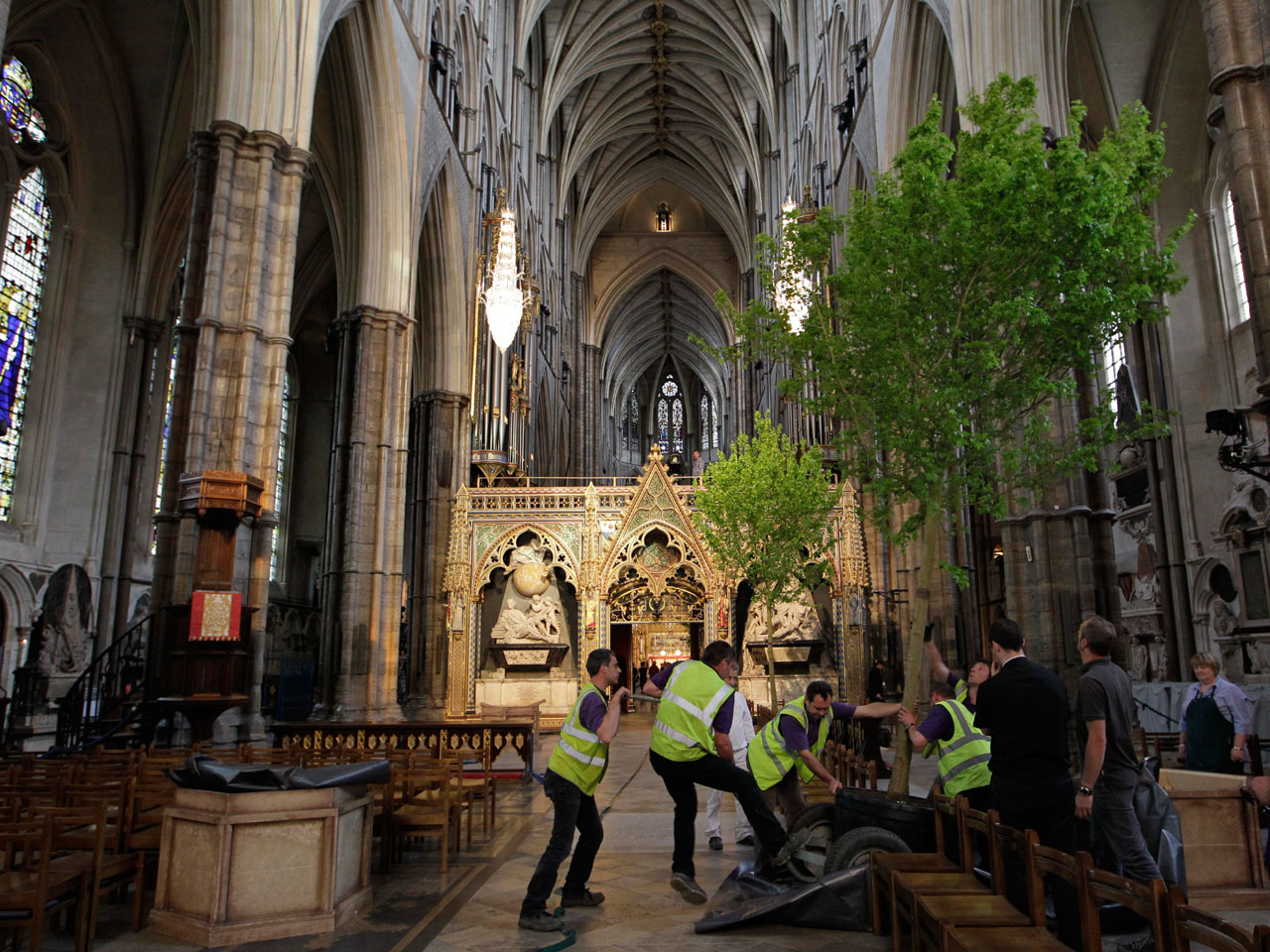 (CBS) Westminster Abbey will be filled with a sea of seasonal British flowers and foliage when Prince William and Kate Middleton marry on Friday.

The royal wedding venue will be decked out in an avenue of trees - six English Field Maples and two Hornbeams, some reaching up to 20 feet high - that will line the aisle leading to the altar, the palace announced Tuesday.

William and Middleton chose London-based florist Shane Connolly to create the floral displays at Westminster Abbey and Buckingham Palace, the announcement said, because of "his creative approach which focuses on using seasonal, natural and organic flowers" and for his "sustainable approach to floristry."

Connolly told the U.K.'s Press Association that the inspiration for the flowers would be that "everything is sustainable, renewable and appropriate."

The trees, plants and flowers are being sourced from the Saville Gardens and Valley Gardens in Windsor Great Park, Sandringham Estate and other English growers.

Connolly told the PA, "I suggested right from the beginning that we would use things from the royal estates because her whole ethos has been that it had to be British, which would be mine as well, and that it had to be seasonal and as organic to the place as possible."

He added that William spoke to the Queen, who was delighted to supply foliage from the royal estates.

Tradition dictates that the bridal bouquet should be all-white flowers, but Connolly wouldn't give details on whether Middleton will be following suit, People magazine reports.

While the bouquet is being kept under wraps, the flowers being planned for the wedding venue could give clues for what to expect.

Flowers being used in the Westminster Abbey arrangements include azaleas, rhododendron, euphorbias, beech, wisteria and lilac.

"One of the things that has been very important to Catherine and to me are the meanings of flowers and the language of flowers," Connolly told the PA. "We've tried, especially in the wedding bouquets, which you'll see on the day, we've tried very much to make beautiful stories."

He described Middleton as a "dream client" and "like few other brides I've ever met."

Connolly added that the overall look for the day will be "understated."

"I think you can get 'wow' in several ways, and it certainly won't be 'Wow, what an extravagance!'" he said. "It will be, 'Wow, how beautiful' and hopefully, 'How perfectly suited to the day and the nature of the marriage.'"

After the wedding, the flowers and plants will be left in position in Westminster Abbey for the public to view until Friday May 6. After that, the couple has asked that the plants and flowers be donated to charities or re-planted.