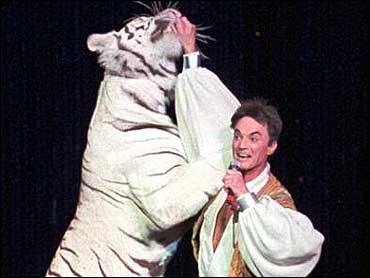 The tiger-was-hungry theory was ruled out. And there was no proof that the animal was deliberately provoked by someone in the audience, or that a terrorist sprayed it with a behavior-altering scent, or that it was unhinged by a woman with a beehive hairdo.

But federal investigators still do not know what led a Bengal tiger to attack illusionist Roy Horn of Siegfried & Roy during a performance nearly two years ago.

The U.S. Department of Agriculture's final report — dated Sept. 28, and consisting of the Mirage hotel-casino's internal investigation, a Las Vegas police probe and witness statements — was obtained by The Associated Press through a Freedom of Information Act request.

The case was finally closed late last year with no official determination of what set off the animal, named Montecore.

The 380-pound white tiger sank its teeth into Horn's neck and dragged him off stage in front of a horrified audience Oct. 3, 2003, at the Mirage. The animal damaged an artery carrying oxygen to the magician's brain and crushed his windpipe.

The mauling that left Horn, 60, partially paralyzed and ended the long-running "Siegfried & Roy" production, one of the most successful shows in Las Vegas history.

"Detectives were unable to determine what caused Montecore to deviate" from the act, Las Vegas police said in its share of report.

In its comprehensive account of the mauling, the 233-page report said the nearly 7-year-old tiger did indeed attack Horn. Nowhere do investigators conclude the tiger was trying to aid the entertainer after it knocked him down — despite the claims of Horn and others that the animal was only helping him.

Investigators explored a variety of other theories that were advanced by the casino and others.

Detectives with the Las Vegas Police Department's homeland security unit were assigned to the case because some of the scenarios that were suggested — among them, that animal-rights activists provoked the attack, or that it was an act of economic terrorism against Las Vegas.

MGM Mirage spokesman Alan Feldman said the resort wanted authorities to look at the possibility that someone deliberately distracted the tiger, since the animal had performed 2,000 times without incident.

He said the casino was flooded with e-mails such as this one the USDA included in its report: "If there is audio & video of the tiger attack it should be analyzed for far-UV and or high ultra sonics, as well as other triggers that might be the work of a terrorist aiming at a high profile GAY target."

Las Vegas police also said there was no proof a woman with a "beehive hairdo" distracted the tiger or it had been sprayed with a scent that drove the animal wild.

"At the end of it all, we don't have a reason," Feldman said.

The manager of Horn and his show business partner, Siegfried Fischbacher, did not immediately return messages for comment.

The USDA report provides new details about the sequence of events before and after the attack. It said that a show employee pulled the tiger's tail, jumped on the animal and grabbed it by the mouth to try to get it to release Horn. At the same time, another employee sprayed Montecore with a carbon dioxide canister. The tiger finally let go.

In its final report, the USDA said the "Siegfried & Roy" show failed to protect the audience because it had no barrier separating the exotic animals from the crowd.

"The big cats could have easily jumped off the stage and into the audience," said USDA official Robert M. Gibbens, who attended an earlier performance.

The USDA issued a letter of noncompliance to the illusionists' production company, S&R Productions, but the warning did not carry any penalties.

It is not clear why the USDA did not advise the company earlier about erecting a barrier. The agency conducted at least four routine inspections at the Mirage since mid-December 2002. The USDA did not immediately respond to an e-mail for comment.