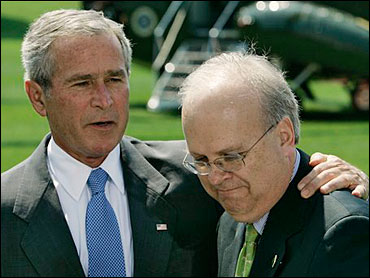 There was a lot of emotion today in the voices of Karl Rove and George Bush. Together on the White House lawn, they announced Rove's resignation.

Was this the way either of them expected to part company professionally? Rove, who the president often referred to as "The Architect," helped George Bush get elected governor of Texas — and elected President of the United States.

I had occasion to meet the young George Bush several times in the late 1980s and early '90s — few would have pegged him as having much political potential. Rove took that raw material and harnessed it into a politician. Bush was born a blue blood, but he spoke in Red State drawl. That stubbornness wasn't a fault, but an attribute. It all worked so well.

After the president was re-elected, there was talk of how he would spend that political capital in his second term. Scandals and the war without end in Iraq have just about bankrupted the president's popularity, though.

And so it was a tearful goodbye today. The subtext: What might have been.