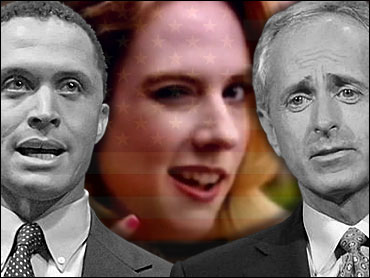 The ad, in which a white woman with blonde hair and bare shoulders looks into the camera and whispers, "Harold, call me," and then winks, was produced by Scott Howell, the former political director for Rove's consulting firm in Texas.

The RNC ad doesn't mention that "Harold" is black, but the NAACP and others have complained the commercial makes an implicit appeal to deep-seated racial fears about black men and white women.

The race between Ford Jr. and Republican Bob Corker is among the most competitive and nasty U.S. Senate races in the nation. But it didn't just happen with a racially-charged ad from Republicans, reports CBS News national correspondent Byron Pitts.

The Democrats struck first weeks ago by playing the class card in an add which states that Corker's "personal income grew by 40 percent to $11 million."

Howell is no stranger to controversy. He was media consultant for Sen. Saxby Chambliss when his campaign ran an ad showing a picture of then-Democratic Sen. Max Cleland, who lost his legs in the Vietnam War, alongside Osama Bin Laden and Saddam Hussein.

Race was always an element of the Tennessee contest as Ford seeks to become the first black man elected to the Senate from the South since Reconstruction. The issue slammed into the public consciousness this week with the latest ad.

"I've not met any observer who didn't immediately say, 'Oh my gosh!' It was a race card," said Vanderbilt University professor John Geer, an expert on political attack ads.

The goal of the ad is to persuade people who don't like Ford — and who might have been thinking about sitting at home this election — to vote, reports CBS News correspondent Gloria Borger.

The RNC has taken the ad off the air after a five-day run. However it was still appearing on at least one TV station in Chattanooga — WRCB-TV — as of Wednesday. The station was still airing the ad because it did not want to run the GOP's replacement commercial. The new ad says Ford "voted to recognize gay marriage" and "wants to give the abortion pill to our schoolchildren," reports the Nashville Tennessean.

Hilary Shelton, director of Washington bureau of the National Association for the Advancement of Colored People, said the ad plays off fears some people still have about interracial couples.

"In a Southern state like Tennessee, some stereotypes still exist," he said. "There's very clearly some racial subtext in an ad like that."

The RNC, which paid for the ad, denied that it had any racial subtext. Party chairman Ken Mehlman said it was produced by an independent organization, in accordance with campaign finance law, "without the knowledge, the participation, the advice, the approval or the involvement of either the national party or the campaign."

"We essentially write a check to an independent entity and they do what they want with it," Mehlman said in an interview with The Associated Press.

Independent expenditure groups, Borger explains, spend their own money at the end of a campaign and place these ads.

Mehlman's dismissal of claims the GOP is playing the race card comes as the party chairman pushes the candidacy of three black Republicans in contests farther north — gubernatorial candidates Kenneth Blackwell in Ohio and Lynn Swann in Pennsylvania, and Senate candidate Michael Steele in Maryland.

Mehlman also has made an effort in this election cycle to attract African-Americans to the GOP, speaking to various black groups around the country.

In the ad, the woman brags, "I met Harold at the Playboy party!" — an apparent reference to Ford's attendance at a Playboy Super Bowl party in Jacksonville, Fla., last year.

"When I saw it after it had been up, my reaction was not that I thought that this ad was racist," Mehlman said. But he added: "I have heard from people who I respect who raised concerns about it from that perspective."

Corker called the ad tacky and said it should be taken off the air.

Under the Bipartisan Campaign Reform Act passed by Congress in 2002, political parties can pay for "independent expenditure" advertisements against opponents that do not count against legal spending limits on campaigns. But the party is not allowed to play any role in creating the ad or deciding how and when it will be used.

Democratic National Committee general counsel Joe Sandler said that Mehlman did have power to pull the ad from the airwaves, even if he had no control over the content, because the RNC is responsible for the advertisement.

"He could take it down with a phone call," Sandler said.

Ford has clashed with Republicans over ads earlier this year.

Ford has accused the RNC of using a "dark, shadowy figure" to represent him in a TV ad. He told the Chattanooga Times Free Press that the ad "injects a little race in this thing, the way they have me pictured."

He also suggested that the Tennessee Republican Party used a darkened black-and-white image of him on a fundraising letter. Ford is light-skinned.

An independent group briefly aired a radio ad that had the most explicit attack.

The ad, paid for a group identified as Tennesseans for Truth and aired on a small station near Nashville, criticized Ford's membership in the Congressional Black Caucus, which the ad said "represents the interests of black people above all others."

Both Republican and Democratic officials have said they did not know who was behind Tennesseans for Truth.