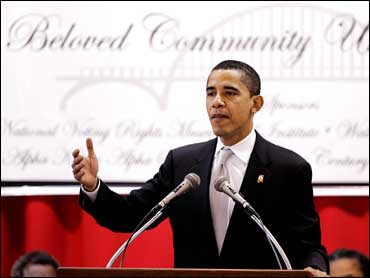 "He's charismatic, he's articulate, he's a very strong figure on the national stage," White House political adviser Karl Rove told an Arkansas crowd. "But something tells me that people are going to say (they want) experience and depth. As a result it's going to be, 'Can he live up to the standards?"'

Rove spoke at an event arranged by the University of Arkansas Clinton School of Public Service.

Sen. Joe Biden of Delaware, a Democratic presidential hopeful, described Obama to the New York Observer in January as, among presidential candidates, "the first mainstream African-American who is articulate and bright and clean and a nice-looking guy." Biden later apologized for his remarks.

After Biden's remarks, the Illinois senator cautioned that they could be taken as disparaging towards previous black presidential candidates, including Carol Moseley Braun, Shirley Chisholm, Jesse Jackson and Al Sharpton.

President Bush also referred to Obama as "an attractive guy, he's articulate" during a January interview on Fox News Channel.