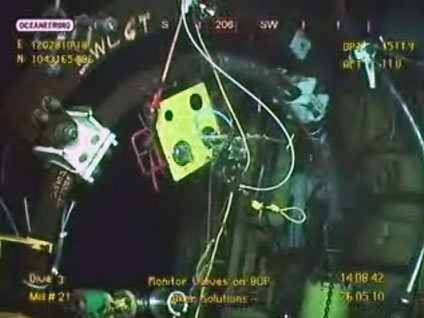 
The airing of a tape of Osama bin Laden capped a week of bad news for President Bush that threatened to derail his candidacy in the final days of the presidential election.

For Mr. Bush, it was one piece of bad news after another – reporting of hundreds of tons of explosives looted in Iraq, tens of billions more for the war. And late this afternoon, a tape of bin Laden airing nationwide, where America's chief adversary appears in good health and secure.

Even before the latest bin Laden tape, Sen. John Kerry had put President Bush on the defensive in the final week of the presidential election.

Outside of there being an "October Surprise," the frenzied week did underline Kerry's indictment of Mr. Bush: that the president mismanaged the war in Iraq and took the eye off the "real threat " -- al Qaeda. Meanwhile, it seemingly undermined Mr. Bush's message that the war effort was proceeding as planned and that the invasion of Iraq did not siphon resources from the Afghan war on al Qaeda and its leader bin Laden.

"I can't believe the president or his campaign would have wanted to spend the last week of the election playing defense, answering questions for his mismanagement of the war in Iraq, having to deal with the serious facts on the ground of what happened there," said Kerry's chief strategist Tad Devine, in a conference call with reporters Friday.

Speaking prior to the release of the bin Laden tape, Devine said the week's events have hurt the Bush-Cheney campaign because it supported the Democratic nominee's criticism that Mr. Bush did "rush recklessly into war with no plan to win the peace."

On Monday, The New York Times and CBS News reported that 377 tons of highly explosive material was looted from a munitions complex apparently left unguarded by U.S. troops.

After days of back-and-forth between the two campaigns, Mr. Bush fired back Wednesday, saying that Kerry was "denigrating the action of our troops and commanders in the field without knowing the facts." Vice President Dick Cheney insisted the explosives were gone by the time U.S. troops reached the weapons site. The Pentagon attempted to substantiate the claim.

But after a Minneapolis ABC affiliate broadcasted a time-stamped video Wednesday night showing U.S. troops at the facility nine days after the fall of Baghdad, the Bush-Cheney campaign defense seemingly unraveled.

"[The candidates] were like opposite ends of a pole, and as each attacked the other they would be more dug in, in what for each are ridiculous positions," said former U.N. weapons inspector David Albright, president of a nuclear disarmament think tank in Washington, the Institute for Science and International Security.

"[The Bush-Cheney argument] that the high explosives weren't there when the troops got there – and remember the Pentagon floats that picture yesterday implying that but the satellite photo says nothing – it's absurd," Albright said.

Yet the former arms inspector is critical of Kerry as well. While Albright said "the looting is symptomatic of inadequate troop protection and lack of concern about monitored items by the U.N.," he added "Kerry clung to that too much.

"It's one thing in the heat of the moment to say 'Well, this could have killed our troops.' But then you want to step back and say let's find out," Albright said. "But the political conflict made it very hard for anybody to step back."

Still, there is no concrete indication that the bad news this week had tangibly damaged President Bush's chances at reelection. Bush-Cheney Campaign Chief Strategist Matt Dowd, in fact, said the campaign's own tracking polls show this week's events have helped Mr. Bush.

"If the question is the war on terror, if the question is Iraq, the public has already responded. They support the president by double-digit margins on these issues," Dowd insisted. "We are comfortable with the discussion this week."

It is far too early to tell how the airing of the bin Laden tape affects this presidential race. As with the week's events in Iraq, the news could remind undecided voters that the United States is at war and many Americans could be inclined to stick with the commander in chief who has polled consistently better on national security than Kerry.

Alternatively, the bin Laden tape, combined with news of hundreds of tons of missing munitions, may also bring to bare questions regarding whether Mr. Bush "rushed to war" in Iraq without sufficiently planning, as his Democratic opponent claims. Consistently, about half of Americans have disapproved of the war.

Bin Laden's message, broadly translated, was in part that "Sept. 11 would have been less severe if Bush had been alert." It is unclear when the al Qaeda leader recorded the message. Apparently speaking directly to the American people, bin Laden added that "Bush still practices deception and is misleading you."

In a rare showing of unity among the competing candidates, Mr. Bush and Sen. Kerry both denounced the tape.

"As Americans we are absolutely united in our determination to hunt down and destroy Osama bin Laden and the terrorists," the Democratic nominee said. "They are barbarians."

President Bush told reporters that "Americans will not be intimidated or influenced by an enemy of our country." Mr. Bush added that "we are at war with these terrorists" and that he was "confident that we will prevail."

The final week, in all, was a striking reminder of how this longest of presidential elections was dominated by one issue: national security.

With Democrats admitting that Kerry failed to captivate voters, they point out that polling suggests the Democratic nominee did successfully present himself as a viable alternative.

It leaves a presidential election where the winner could be decided by the very issue political observers throughout the year predicted it would be: Americans view of how Mr. Bush's handled of the war in Iraq, as well as the larger war on terrorism. And if voters disapprove, the questions remains, should the commander in chief be fired?

Speaking to CBS, Dowd remains confident. "We think we have a slight wind at our back," he said. Though, the chief strategist for Mr. Bush bases his optimism on polling. He would not speculate on how Americans would react to the bin Laden tape so close to the Nov. 2 election.

But for political observers, the week certainly seemed to work to Mr. Kerry's advantage. The inclination was that for the final week to be saturated with questions belying Mr. Bush's effectiveness as commander in chief – specifically when he had stacked his reelection on such – it would likely damage President Bush's hopes for reelection.

"This will help [Kerry] with some voters; the question is how many voters," said Leo Ribbuffo, a presidential historian at George Washington University.

"But for those who are worried about Bush's competence as a war manager, they will sway," he added. "This does underscore Kerry's message that whatever your view on Bush's justification for the war, he has bungled it."