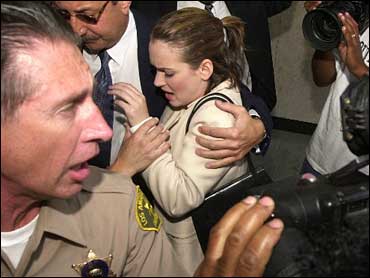 A preliminary hearing into shoplifting charges against Winona Ryder that began with an irked judge ordering the Oscar-nominated actress to appear in court was cut short on Monday when she apparently broke her arm during a media crush.

In a bizarre twist to a strange day, Ryder's lawyer told Superior Court Judge Elden Fox that his famous client could not go on with the hearing, which had already been postponed four times, because she needed immediate medical attention.

Attorney Mark Geragos told Fox that Ryder, in trying to return to court amid a crush of television cameras and reporters, was struck on her right elbow - which was still sensitive from a previous injury - by a piece of equipment.

"They did an x-ray and it turns out she has a broken arm," Geragos said later, in an interview on CNN's "Larry King Live." "There's a fracture on the elbow area. It appears it's a clean fracture, so it looks like it'll heal."

Ryder gingerly nursed her right elbow as Judge Fox excused the parties from court and asked that they return on Thursday.

"She's quite a trouper, I'll tell you," Geragos told CNN. "It was kind of like a rugby scrum out there and she got whacked from behind on back of the elbow. Her arm and elbow area kind of instantly swelled up."

Geragos said he and a sheriff's deputy talked Ryder into going to the hospital for treatment even though the actress initially declined, saying she wanted to finish the hearing.

"She wanted to stay there and continue, get this over with," Geragos said. "And I said 'I'm not going to sit here while your arm is blowing up.' Finally I went into chambers and told the judge: 'I'm taking her to a doctor, I'm taking her right now'."

The day began with Geragos arriving in court without Ryder, explaining to Fox that he was seeking another postponement of the matter despite an earlier admonition by the judge that he would not delay the sixth-month old case again.

Fox also rejected an 11th-hour motion by Geragos to have the Los Angeles County District Attorney's Office removed from the case over allegations by the high-profile defense attorney that they had an "ax to grind" against Ryder.

"I want your client here, so call her," a clearly impatient Fox told Geragos.

Ryder, appearing pale and nervous, arrived about an hour later, offering no comment to the throng of reporters outside court and taking a seat before prosecutors called their first witness.

The 30-year-old actress, who first shot to fame in the 1988 ghost comedy "Beetlejuice," was arrested in December on charges of trying to steal clothes, handbags and accessories worth about $4,800 from the Beverly Hills Saks Fifth Avenue store.

Geragos has said that Ryder paid for all of her merchandise and has vowed that she will be exonerated of the charges.

The preliminary hearing is to determine whether there is sufficient evidence to put her on trial.

Kenneth Evans, the store's asset protection manager, testified Monday that Ryder walked past cash registers and exited the store with merchandise. He detailed the actress' movements through the store's three floors, laden with bags and merchandise.

Ryder took notes Monday as Evans - questioned by Deputy District Attorney Julie Jurek - testified that the actress had quickly put on one of two hats she picked up, and then wore it throughout the store.