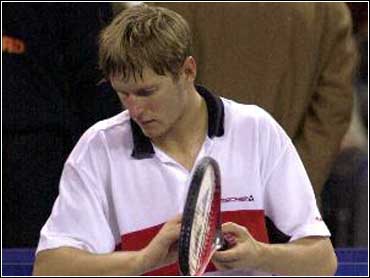 Marc Rosset upset Yevgeny Kafelnikov 6-4, 6-4 to win the AXA Cup in a feisty title match in which Rosset contends the top-seeded Russian tried to smash him with the ball.

Kafelnikov entered the final without losing a set and taking the No. 1 spot from Andre Agassi in the new rankings.

"Sometimes he smiled when I missed an easy shot and I replied by showing him my fist," Rosset said. "Sometimes you can be world No. 1 or the best player but you have to accept it when you lose, even against lower ranked players."

Rosset, the 1992 Olympic champion from Switzerland, won a tournament for the second time this year. He has beaten Kafelnikov 10 of 13 times.

"He tried to hit me a couple of times at the net and that gave me some special anger to beat him," said Rosset, who earned $144,000 for the victory.

"It's normal and it's even good for tennis to see some stuff like that on court it gets the crowd interested. It's the kind of challenge I like. Today he was a bit upset, but it's not a big deal. You can be enemies on court and friends off court."

Kafelnikov said he had good reason for firing shots at Rosset's body at the net.

"I was trying to play my shots," he said. "Marc has a big reach when you go for the lines so I was going for his body to try and win the point.

"Whatever he says it does not really bother me. I have my own opinion. What I was really angry with myself about was that I was the favorite, and when I needed to come up with the shots I was not able to."

Kafelnikov said during the week he was unhappy with the court at London Arena. The Russian had problems holding serve in the second set and twice had to save break points before Rosset broke for a 4-3 lead.

Kafelnikov had three chances to break back but was unable to do so and lost in 76 minutes.

Rosset broke in the third game of the final set only to have Kafelnikov break back. Kafelnikov was broken again in the final game of the set and slammed a ball into the net after losing the game with a poor volley.