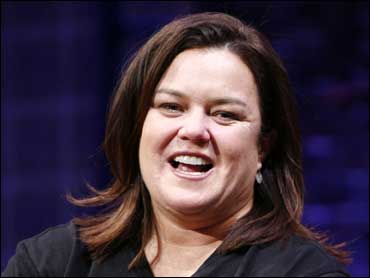 Rosie O'Donnell spent part of her first day away from "The View" shoe shopping on the Web site Zappos.com with her daughter Vivienne Rose.

In a new video posted on her Web site titled "First Day Off," O'Donnell sits with her daughter in her lap and navigates through the shoe Web site and comments on shoes.

When Vivienne observes that there are so many different shoes to choose from, O'Donnell says, "that's the problem with Zappos, there's lots of choices."

Vivienne chooses a pair of Vans sneakers with stars. "They're rated very high, a lot of people love these shoes, five stars, we're getting 'em," O'Donnell says, before giving Vivienne a high five.

During her time at "The View" O'Donnell told a story about a shoe shopping excursion with Vivienne in which the toddler selected a pair of shoes that were too small because O'Donnell was in rush to leave a shoe store.

O'Donnell and her partner, Kelli, have four children and reside in New York.

The comedian left her post at "The View" on Friday following an on-air dust up with co-host Elisabeth Hasselbeck. She said later that she was perturbed about the use of split screen during the verbal face off.

Barbara Walters said on the show Tuesday that O'Donnell is welcome back anytime. Hasselbeck said that she and O'Donnell had communicated over the long holiday weekend and were working toward forgiveness.