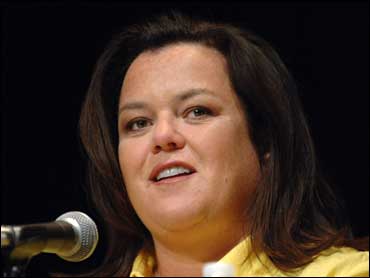 Rosie O'Donnell says that she'd love to host "The Price Is Right" — and not just because she's a long-time fan of the show.

If she does end up doing network television again, O'Donnell joked that she wouldn't lock herself into a long-term contract.

"I don't know what I'm going to do next, but I'll try whatever I do to stay my whole contract," she said. "I think shorter contracts are better for me. I need more downtime."

In the meantime, O'Donnell has been performing on Cyndi Lauper's True Colors tour. The tour will take her to Houston, Dallas, San Francisco and Los Angeles.

O'Donnell has been criticized for a joke she made during a concert in Washington to the mostly gay audience about her stint "The View."

"We were in Merriweather Post Pavilion in DC. I said, 'Oh it's so nice to be back with my gays. I've been with the straights for about six months. Oh, it's tough. They'll stab you in the back with a high heel.' It was funny; believe me I got a big laugh," she said.

However, O'Donnell had nothing but praise for her former "The View" co-host and fellow stand-up comedienne, Joy Behar.

"She is fantastic, and there is great chemistry between us," she said.