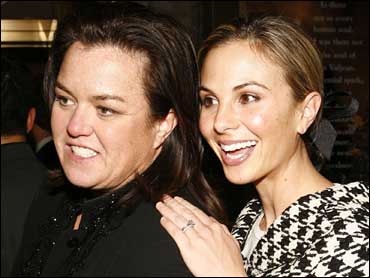 Hasselbeck said Tuesday on "The View" that she and O'Donnell were "in communication a lot," though she didn't say if they spoke on the phone or just e-mailed. O'Donnell had said before she didn't think she and Hasselbeck would ever speak again.

Hasselbeck says they tackled the hot topic of "the power of forgiveness." She says they have "begun that process" and that enabled them "to move on in a positive way."

Barbara Walters says she, too, was e-mailing O'Donnell because she says they remain "close friends." She says O'Donnell is welcome back on "The View" at any time.

Sitting in the seat once occupied by O'Donnell, Walters said she hopes O'Donnell will visit often. On Friday the network announced O'Donnell would be leaving the show before her scheduled departure in June.

The news that O'Donnell was leaving made the showmates "very sad," Walters said.

"Rosie and I have been emailing each other all weekend with the most affectionate notes because we are very close friends, and, as I said last week, my admiration and affection for her, Rosie, if you're watching, nothing will change that," Walters said.

Netflix's growth slows on brighter outlook for the pandemic

Walters said that O'Donnell was not fired but that it was her decision to leave. She said the split screen they used during her fight with Hasselbeck was partly to blame.

"Rosie was never fired and there was no desire to have her leave the show," she said. "It was her decision not to come back. We hoped that she would have next year, as long as she wanted to. Then, again, this time, it was Rosie's decision not to return for the other three weeks. She has said on her blog that she was upset by a split screen, which is a device that shows two people together."

"I just think that so much was exacerbated by a very hot discussion that usually takes place off camera and took place on camera," she said. "But it is 'The View,' we do have different opinions. I will always — we will always be grateful to Rosie for her contribution this year. She's welcome to come back any time she wants and we hope that it will be often. And 'The View' will go on."

"And no need to worry. I know there have been a lot of concerns in the audience. You're still getting free gifts all the time," Hasselbeck joked.