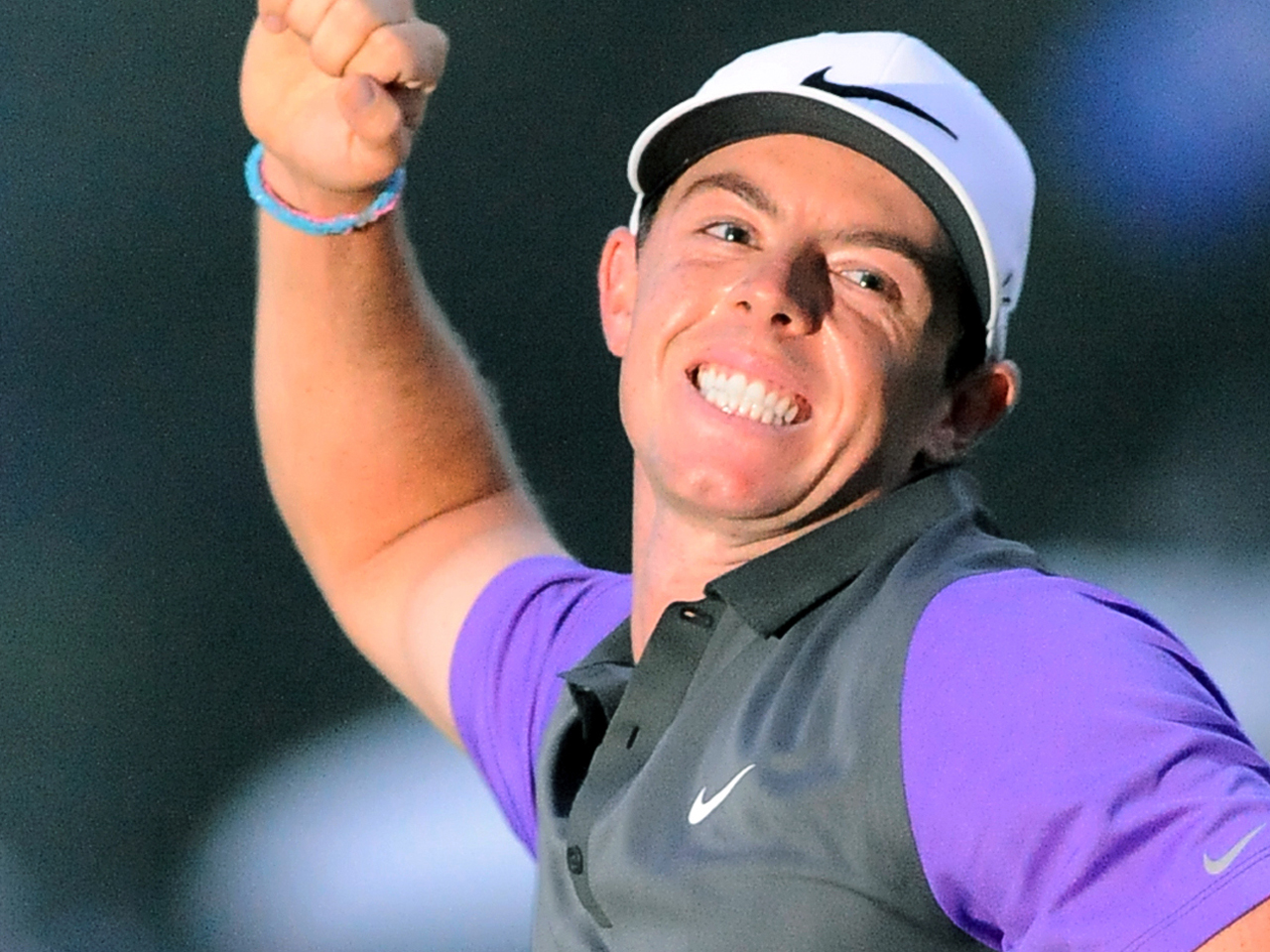 LOUISVILLE, Ky. -- Rory McIlroy stood over a 10-inch putt in gathering darkness to win the PGA Championship as flashes from thousands of camera lit up Valhalla like a rock concert.

Everyone wanted to capture a moment from golf's latest coronation.

In his biggest test, McIlroy played his best golf Sunday to win his second straight major and establish himself as golf's next star.

And what a stage.

The final major was pure theater with an All-Star cast -- Phil Mickelson, Rickie Fowler, Henrik Stenson all with a share of the lead on the back nine. The final two hours were filled with eagles and birdies, with tension and chaos.

McIlroy never had to sweat so much to win one of golf's biggest events. And that's what made this major so much sweeter.

The final par - the easiest shot he faced all day - gave McIlroy a 3-under 68 to outlast Mickelson by a stroke and beat the darkness that threatened to spoil this show. He became only the fourth player in the last century to win four majors at 25 or younger. The others were Tiger Woods, Jack Nicklaus and Bobby Jones, three of the game's greatest players.

Boy Wonder appears on his way to belonging in that group.

"I didn't think in my wildest dreams I'd have a summer like this," said McIlroy, only the seventh player to win the last two majors of the year. "I played the best golf of my life. I really gutted it out today."

Some believe he's already reached the highest level in the sport.

But one of the greatest shows on soggy turf came with a most peculiar ending.

Three shots behind as he stood in the 10th fairway, McIlroy got back in the game with a 3-wood from 281 yards into 7 feet for eagle. He took the outright lead when all three of his challengers eventually made bogey, and finally gave himself some breathing room. With a 9-iron from a fairway bunker to 10 feet for birdie on the 17th, he took a two-shot lead going to the par-5 closing hole.

Because of a two-hour rain delay earlier, darkness was falling quickly and it wasn't certain McIlroy would be able to finish.

McIlroy was allowed to hit his tee shot before Mickelson and Fowler had reached their drives. Both were only two shots behind, still in the game. McIlroy came within a yard of hitting in a hazard right of the fairway.

Then, the PGA of America allowed McIlroy to hit his second shot. Mickelson and Fowler had to stand to the side of the green.

"We were cool with hitting the tee shot," Fowler said. "We weren't expecting the approach shots."

Fowler had a 50-foot eagle attempt to tie for the lead. He was well off the mark, and missed the short birdie putt attempt that cost him his third straight runner-up finish in a major. Mickelson was short of the green, and his chip came within inches of dropping for an eagle that would have tied him for the lead.

Mickelson appeared upset that they had to wait to finish the hole - not standard procedure in a PGA Tour event - and he made two references in a TV interview that this is the only championship the PGA of America runs all year.

"It didn't affect the outcome of the championship at all, I don't think," Mickelson said. "It's not what we normally do. It's not a big deal either way."

Mickelson closed with a 66 and was runner-up for the ninth time in a major.

Fowler became the first player in history to finish in the top five at all four majors without winning one. He closed with a 68 and tied for third with Stenson, who fell out of a share of the lead by missing a 3-foot par putt on the 14th hole. Stenson shot a 66.

McIlroy hit his second shot into a bunker, and he had to two-putt from 35 feet for the win. He lagged the first one to tap-in range, and the major was his. McIlroy repeatedly pumped his fist before letting out a scream above the gallery that had been treated to a Sunday it won't soon forget.

McIlroy won his first two majors by eight shots at the 2011 U.S. Open and 2012 PGA Championship. Only a month ago, McIlroy took a six-shot lead into the final round of the British Open and completed a wire-to-wire win with only a brief scare.

"I think I showed a lot of guts out there to get the job done," he said.

It might not have been possible without a 3-wood on the par-5 10th hole. McIlroy watched Fowler make a 30-foot birdie putt ahead of him for the outright lead and knew it was time to get going. He hit his 3-wood lower than he wanted, and further to the left than he wanted, but it turned out perfect.

Once he joined the leaders with a birdie on the 13th, none of the contenders made another birdie the rest of the way until it was too late.

All that was left after an exhausting day of raw emotions was for McIlroy to summon enough energy to hoist the 27-pound Wanamaker Trophy. He crouched before the presentation, trying to collect his thoughts at the last month. Not since Woods in 2008 has anyone won three straight tournaments, and they were big ones - the British Open, a World Golf Championship and the PGA Championship. He played them in a combined 48-under par.

"He's better than everyone else right now," Mickelson said.