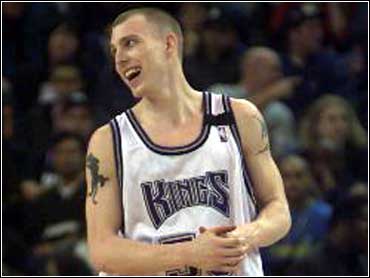 Jason Williams unveiled the elbow pass and the rainmaker.

In a slick show of open-court basketball Saturday that had fans at the Oakland Coliseum Arena gasping for more, Williams came up with a playground pass off his funny bone and a 3-point shot that reached 20 feet in the air.

Elton Brand, meanwhile, used his sheer strength and power to show why he was the top pick in last summer's NBA draft. The Chicago Bulls rookie scored 14 points and grabbed 21 rebounds to lead his team of first-year players over Sacramento's Williams and a group of NBA sophomores 92-83 in overtime.

The fans came to see up-and-down, above-the-rim and no-look pass basketball from the top rookies of this year and last. And they got their fill as this year's crop of first-year players finally pulled out the victory.

Brand had two baskets in overtime, one on a dunk after he made a steal, and flashy Steve Francis had a reverse layup and later a slam in the two-minute extra period.

The fans got to see Cuttino Mobley throw a blind alley-oop pass behind his head to Michael Dickerson for a dunk. And they let out a collective "whew" when Brand roared through the lane for a ferocious dunk on Michael Olowokandi, the NBA's first draft choice in 1998.

Williams didn't dunk, but put up the shot of the day, lofting a 3-pointer that seemed to hang in the air for seconds before settling perfectly through the basket.

Minutes later on a fast break, Williams cradled the ball behind his back and then batted it with his right elbow for a perfect pass to Raef LaFrentz, who missed the shot.

When Francis made a steal at midcourt and then bounced the ball on the floor as a pass to himself before dunking a warmup perhaps for the slam dunk competition later Saturday coach Bill Russell asked the referees if the move was legal.

It didn't matter. It wasn't a day for close officiating or much defense, either.

Guard Andre Miller twice sailed through the lane for old-fashioned layups, only to have his efforts the rest of the game greeted with boos from a crowd that wanted more.

"I learned a big lesson," said Miller, who was booeeven though he was the game's leading scorer with 21 points. "I can dunk. I wish I did."

Paul Pierce scored 18 and Dirk Nowitzki 17 for the second-year players. Lamar Odom added 15 for the rookies.