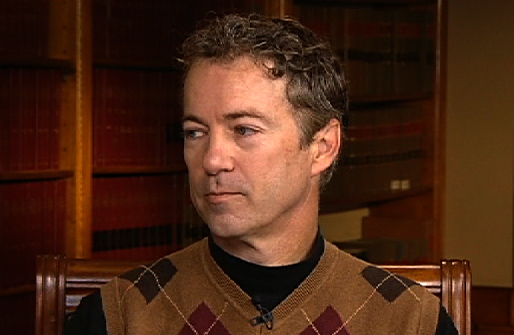 Politics is a family affair for Texas congressman Ron Paul, among the leaders in polls in Iowa among Republican presidential hopefuls heading into today's caucuses.

His son, Sen. Rand Paul (R-Ky.), is stumping for his father in Iowa.

CBS News' Chief White House correspondent Norah O'Donnell noted on "The Early Show" today that Ron Paul has a supportive stance on legalizing prostitution and certain drugs, such as heroin and cocaine.

But Rand Paul said his father's position on those issues isn't part of his campaign message.

Pictures: On the trail in Iowa

Rand Paul said, "I never, ever heard him give a speech campaigning on any of those issues."

O'Donnell said, "He does support those things. He wants to pull troops out of Afghanistan, South Korea."

"I don't think it characterizes who he is," Rand Paul said. "If you go and listen to his campaign stump speech, he is someone who is concerned about the debt, and he thinks we can only fix our debt problem if you address our military spending and domestic spending. But I never heard him use the word 'prostitution,' much less campaign on it. That's not a fair characterization of who Ron Paul is."

Rand Paul also took on the question of whether the U.S. -- and not just Iowa -- is ready for his father to be president.

CBS News chief Washington correspondent Bob Schieffer said, "I just heard a voter say Iowa is ready for Ron Paul. But, you know, when I hear the remarks around the country, is America ready for Ron Paul? Because there's no question your dad is not in the mainstream Republican Party."

"I think that's a matter of opinion," Rand Paul said. "I think the interesting thing about it, when you choose a commander-in-chief, someone who is going to be in charge of our nuclear arsenal, I think you want someone who is reasonable, someone who wouldn't be really happy to bomb other countries. Most of the rest of the Republican field seems to be a little bit overeager to use nuclear weapons to bomb other countries. I think there are people within the Republican Party and definitely many independents who are saying, 'Gosh, we want someone with a little more wisdom and reluctance to go to war."'

For more with Rand Paul about his father's campaign and positions on issues such as foreign and domestic spending, as well as the other Republican contenders, check out the video above.