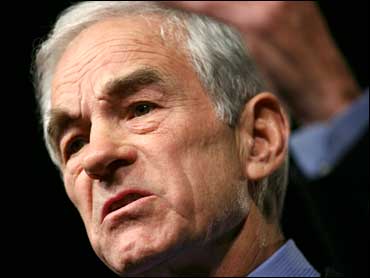 Paul, the Texas congressman with a libertarian tilt and an out-of-Iraq pitch, entered heady fundraising territory with a surge of Web-based giving tied to the commemoration of Guy Fawkes Day.

Fawkes was a British mercenary who failed in his attempt to kill King James I on Nov. 5, 1605. He also was the model for the protagonist in the movie "V for Vendetta." Paul backers motivated donors on the Internet with mashed-up clips of the film on the online video site YouTube as well as the Guy Fawkes Day refrain: "Remember, remember the 5th of November."

Paul's total deposed Mitt Romney as the single-day fundraising record holder in the Republican presidential field. When it comes to sums amassed in one day, Paul now ranks only behind Democrats Hillary Rodham Clinton, who raised nearly $6.2 million on June 30, and Barack Obama.

Paul spokesman Jesse Benton said the effort began independently about two months ago at the hands of Paul's backers. He said Paul picked up on the movement, mentioning in it speeches and interviews.

"It's been kind of building up virally," Benton said.

Paul has been lagging in the polls behind Republican front-runners. But he captured national attention at the end of September when he reported raising $5.2 million in three months, putting him fourth among Republican presidential candidates in fundraising for the quarter.

Paul as of Monday had raised more than $7 million since Oct. 1, more than half his goal of $12 million by the end of the year, according to his Web site.

Latest From The Money Race
Check out the latest tallies for Republicans and Democrats including how much they've raised and spent since the campaign began.

Paul advocates limited government and low taxes like other Republicans, but he stands alone as the only GOP presidential candidate opposed to the Iraq war. He also has opposed Bush administration security measures that he says encroach on civil liberties.