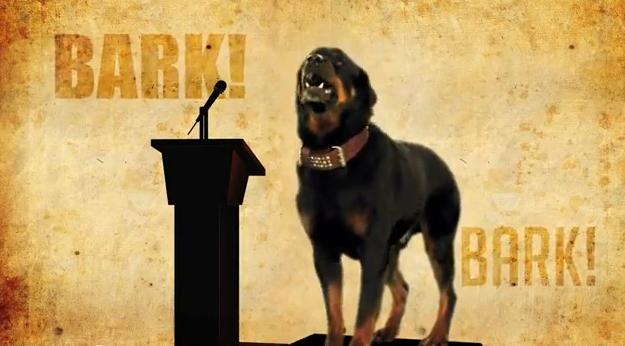 In a new 30-second ad his campaign describes as "fun and energetic," Ron Paul is taking on his fellow presidential contenders as "sorry politicians" - who turn in to "whimpering little shih tzus" when it's "showtime."

The Paul campaign says the ad, called "Big Dog," will run starting Monday on broadcast and cable television in Iowa and New Hampshire.

According to a press release from the campaign, the spot "contrasts establishment Republican candidates unwilling to make difficult choices on spending cuts and debt reduction with the sole candidate whose bite on such matters equals his bark: Ron Paul."

The (seemingly testosterone-fueled) ad illustrates that metaphor literally: "What's up with these sorry politicians? Lots of bark - but when it's show time, whimpering like little shih tzus," a narrator intones, as video of a fierce, barking, generically 'scary'-seeming dog is replaced by an unintimidating - and yes, "whimpering" - white shih tzu.

"This ad is fun and energetic, yet the issues it focuses on are grave and weigh heavily on the minds of voters across America," said Ron Paul 2012 National Campaign Chairman Jesse Benton in a statement. "Through this ad we continue to argue that Ron Paul is the only candidate with a serious economic plan to end out-of-control federal spending, reduce the debt, and curtail government activism that hampers economic growth."