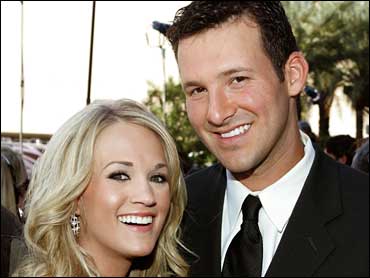 Things may have cooled between Carrie Underwood and her quarterback beau Tony Romo.

The National Enquirer reports that the Dallas Cowboy star has called a "timeout" on their relationship until the end of football season.

"Carrie thought that they were moving closer to a more committed relationship," a source tells the magazine. NFL football season starts in September and ends in January 2008.

Underwood's publicist, Jessie Schmidt, responded to the report in an e-mail Thursday. "We have no comment," he said.

The couple has made many public appearances together, including the Academy of Country Music Awards on May 15. Romo was also in the audience at the "American Idol" finale on May 23 as Underwood performed.

The magazine says Romo flew to Nashville to celebrate the singer's 24th birthday and she celebrated his 27th birthday at a Dallas nightclub.

Apparently this isn't the first time Romo has broken things off. According to the Enquirer, last season the QB said he needed to focus on football after they lost their playoff game. Underwood obliged by giving Romo some space, but not this time, the magazine says. This time she is upset.

"Carrie wants a firm commitment from Tony," the source said.