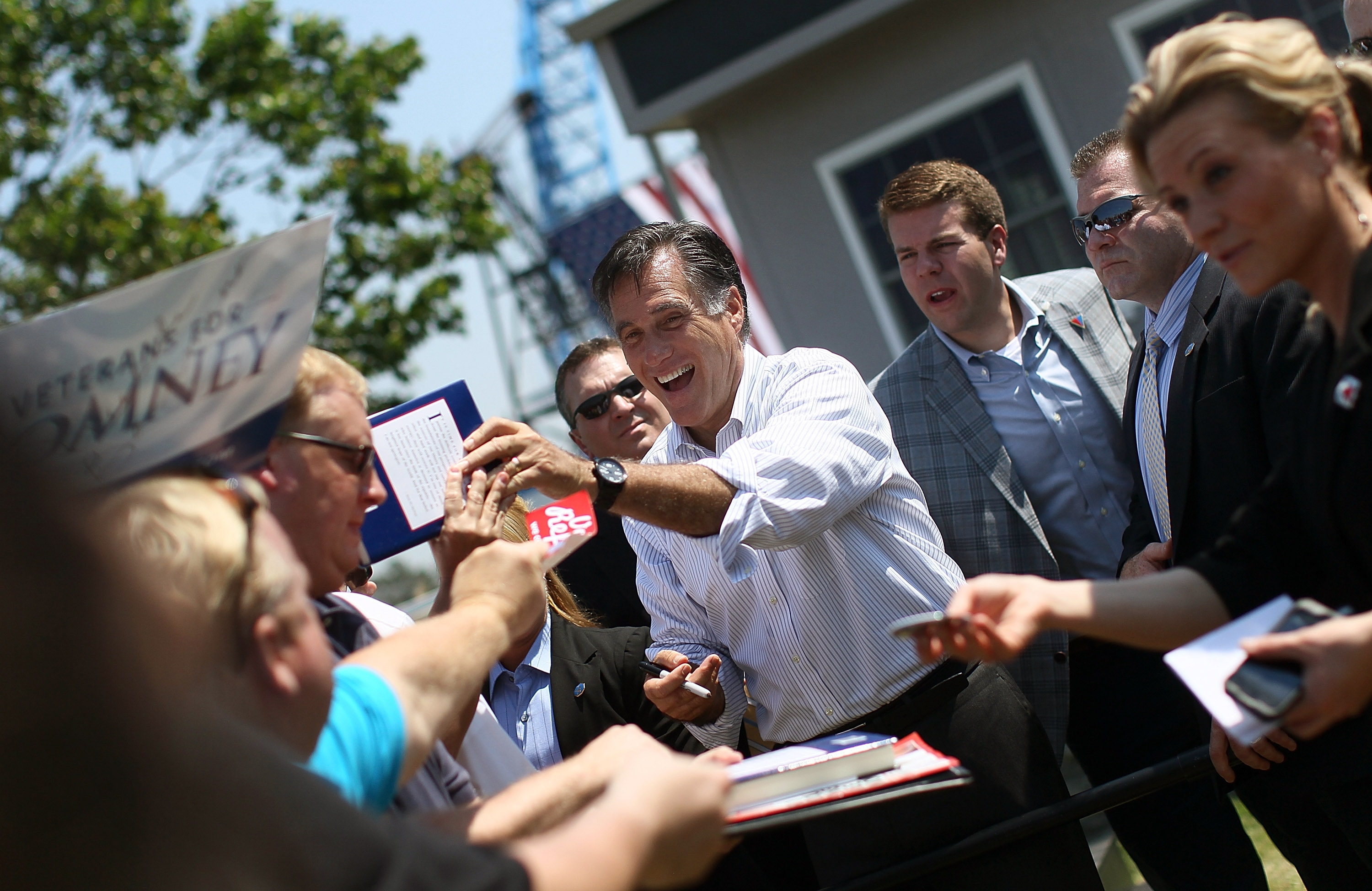 (CBS News) RICHMOND, VA. -- While the state of the race may be up in the air, one thing the Obama campaign is confident in is their boots on the ground.

Democrats across the country - and particularly in swing states - are thoroughly fired up about the ground game that they are voraciously working. Advisers proudly note that their clipboard yielding volunteers are excited, RSVPs to events come in by the thousands, and they've got dozens of offices set up in battleground states across the country. (35 in Ohio! 30 in Florida! And counting.)

They are also happy to draw this in contrast to the their Republican counterparts, who are not as visible on the ground. When Mitt Romney campaigned in New Hampshire in April, his team no longer had an office in the state (they do now), which lay in stark contrast to the aggressive primary battle they had waged there, replete with an extremely robust staff, almost weekly candidate visits for months on end, and thousands of yard signs sprawled out on lawns up and down the Granite State.

Upon his return, the Obama campaign (8 offices strong) launched a Twitter campaign called "Since Mitt's Been Gone." In Iowa, they've made their headquarters an abandoned Des Moines Blockbuster store that Romney staff was based out of during the caucuses. Before Romney headed to states like Pennsylvania and Michigan on his bus tour last week, senior adviser Russ Schriefer was asked by CBS if the campaign was planning on leaving staff behind along the way, to invest in more boots on the ground there.

"Unlike the Obama campaign," said Schriefer, "We're not big on outlining our strategy out loud." Other Romney staffers are less polite when challenged on their lack of ground game, rolling their eyes and thoroughly unconvinced, it seems, that the myriads of OFA offices and volunteers will do much to convince independent voters to re-elect the president in the fall.

In Virginia though, there's a difference. Here, the Romney campaign is not sniffing at the Obama effort on the ground but trying to match it.

"We're going to make sure that we not only match them, but exceed them, door knock for door knock, phone call for phone call," says Pete Snyder, who is chairing the RNC's Victory campaign in Virginia. One Romney staffer sounds identical to an Obama staffer in every other state: "It will be tight because they're spending a lot of money here - but we feel confident because of the ground game."

The Republican nominee's efforts in the Old Dominion did not just pop up overnight. In order to get on the primary ballot for Virginia, campaigns were required to gather 10,000 valid signatures from registered Virginia Republicans, with at least 400 signatures from each of Virginia's 11 congressional districts. Only Romney's and Ron Paul's campaign met this requirement. Away from the national spotlight, which was trained more closely on bloody battlefields waged between the many GOP candidates spending time in other early voting states, Romney's team collected over 16,000 signatures from shopping malls to Washington Redskins games between August to December 2011.

The Romney campaign's primary effort was "adult and systematic," says Snyder. "The other campaigns were sort of flying by the seat of their pants and just couldn't get it done." (Romney himself joked about his opponents inability to reach the 10,000 mark - comparing Newt Gingrich's bemoaning the issue to an episode of "I Love Lucy" at a chocolate factory. "I mean, you gotta get it organized," Romney quipped.)

Now that they're past the primary. Romney's campaign is working hard to only keep that momentum building. They have melded with the Virginia GOP and are fully taking advantage of a ground game infrastructure that was somewhat ripe for the picking in Virginia. When running for governor in 2009, Bob McDonnell set up nine offices across the state in order to get out the vote, and since Virginia has elections every year on different statewide offices, Republican volunteers and staffers have inhabited them ever since. Like the Obama campaign, they take social media seriously, tailoring Facebook and Twitter outreach to different communities, and hawkishly monitor when items are shared or retweeted. Also similarly to their Democratic counterparts, they have "neighborhood captains" -- people who lead volunteer troops in certain areas.

Different person-to-person retail engagement strategies are important in Virginia where plenty of shoe leather can be burned walking up mile-long driveways on southwestern farmland and patience can be frayed waiting for a voter to return home from DC-metro traffic in the northern parts of the state. As such, one person heavily involved in the ground game efforts says that since 2009, the state party has been picking "safe" districts and testing out different outreach mechanisms, to see how to maximize their outreach. David Rexrode, executive director of the Virginia Republican Party, says this is the election is where the results of those experiments will really come to light. With an election as close as this one will be, he says, "The ground game is good for a field goal." He's confident in the odds of the final pay-off. "I think we have a great opportunity to win here - we've put the time in."

Romney himself has been to the state multiple times as well - and he heads back Tuesday and Wednesday, holding events in Salem and Sterling respectively.

Also, there are two NASCAR races in Virginia just before the election - in Richmond and Martinsville. Both of those are areas where each campaign is clawing for middle-class votes. Romney staffers say they hope their candidate will be able to attend the races, but even if he's not there, it's quite certain that they will be.