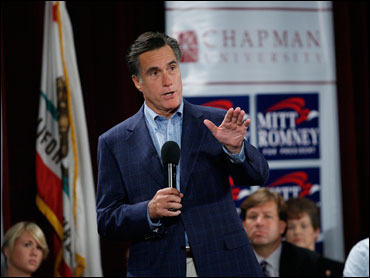 Republican presidential candidate Mitt Romney cast himself as more businessman than politician Sunday, as the one-time venture capitalist tried to differentiate himself from his rivals during his first townhall meeting in California.

Taking questions from an audience of 500 in a conservative tract area just south of reliably Democratic Los Angeles, the former Massachusetts governor repeatedly contrast himself with "Washington politicians" and said he has the distance from the Beltway to be a uniter, not a divider.

"I'm not in this race for the next step in my political career. I don't have a political career, to tell you the truth," Romney said during a stop at Chapman University. "I've only been in politics four years as a governor. I loved the experience, but my life is my wife and my family. My career was building an enterprise, a business, with some other fellows."

"I haven't been uniformly successful - I've tried to be successful - but I believe that experience will be helpful to America," said Romney.

While decrying the partisan tone in the capital, including both parties' focus on last year's midterm elections, Romney failed to note that during that time, he served as chairman of the Republican Governors Association and ran an aggressive effort not only to hold onto a Republican majority in the nation's statehouses but also to stave off the GOP's midterm losses.

Afterward, Romney left for two fundraisers in Orange County, a conservative hotbed. During a five-day swing through California, Romney planned to raise money and make public appearances in Santa Clara, near the Bay Area, as well as Bakersfield, just north of Los Angeles, and Long Beach, just to the south.

During his Chapman appearance, Romney was confronted by a high school teacher, Pat Alviso of Huntington Beach, who said her son had just completed his second Marine tour in Iraq and was suffering from a variety of physical and mental ailments.

She asked Romney why none of his sons was in the military, and she accused him of favoring sending 100,000 more troops to the war-torn country.

Romney did not directly Alviso's question about his sons, a query he answered in Iowa in August by saying his sons were serving their country by assisting his campaign. He later said the comparison was a mistake.

But Romney told Alviso he did not favor adding more troops to Iraq. Instead, he said he supported a Pentagon plan to remove a brigade a month as Iraqi forces take control. He also said he supports adding 100,000 troops to the U.S. military to reduce the need for quick troop redeployments such as that experienced by her son.