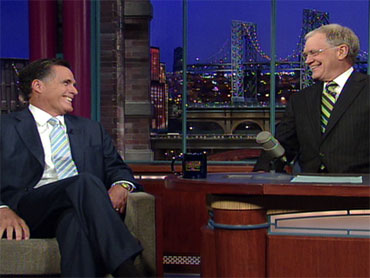 (CBS)
Likely 2012 Republican presidential candidate Mitt Romney appeared on CBS's "Late Show with David Letterman" Tuesday as part of his tour to promote his new book, "No Apology: The Case for American Greatness."

Asked about potential rival Sarah Palin, Romney called her "terrific" and added, "she's got energy, passion." He then urged Letterman to "be careful what you say about her by the way," a reference to the feud between the two kicked off by Letterman's comments about Palin's daughter.

Letterman grinned and nodded, saying, "I've had my…," before trailing off as the audience began laughing.

Responded Romney: "She has a rifle, you know."

In his opening monologue, Letterman called Romney a "good looking Republican from Massachusetts," comparing him to new GOP senator Scott Brown, "but with pants."

The two men discussed cars and the auto industry, with Romney telling Letterman he drives a Ford Mustang. They also talked about Romney's father George, the former Michigan governor and auto executive.

They eventually turned to an incident in which Romney was punched on a flight departing from Vancouver last month.

"The fellow in the seat in front of my wife put his seat back during the takeoff procedure," said Romney, who said he "tapped him on the shoulder and reminded him" that the seat had to be upright for takeoff.

"He became somewhat agitated and they removed him from the airplane," Romney said. "He didn't like that, by the way, and gave me a good swat."

"And he broke my hair," Romney added, with a grin.

Later in the interview, the two men discussed the health care reform effort, with Romney saying "the problem is not the insurance companies." He said it was important to change the incentives to make health care more like a consumer market in order to control costs.

In his book, Romney criticizes President Obama for going "before so many foreign audiences to apologize for so many American misdeeds, both real and imagined."

"There are anti-American fires burning all across the globe; President Obama's words are like kindling to them," he writes, attacking Mr. Obama for "the steady stream of criticisms, put-downs, and jobs directed at the nation he was elected to represent and defend."

Romney kicked off the book tour Tuesday, appearing on ABC's "The View" and Fox News Channel's "Hannity" in addition to the "Late Show."