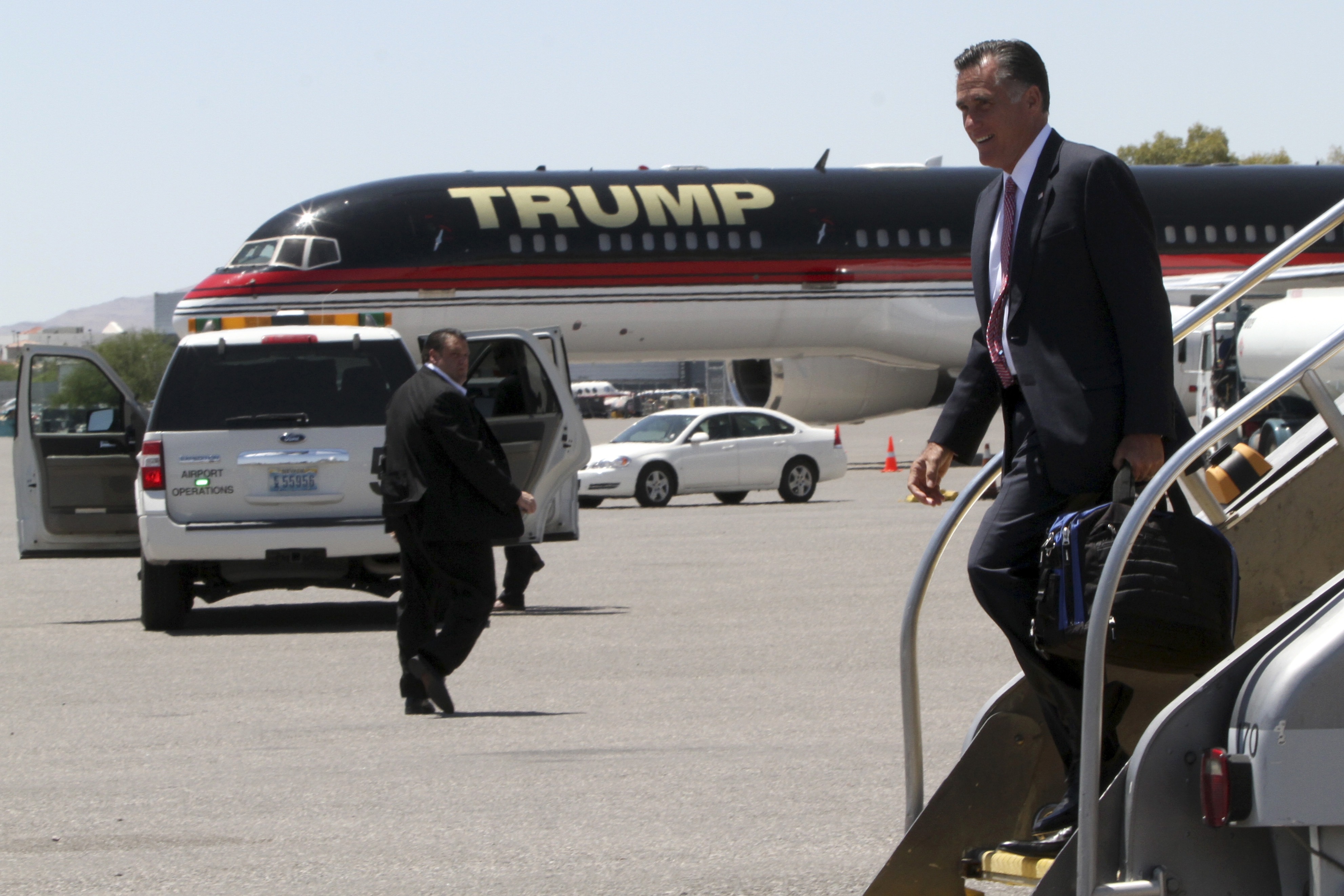 Mitt Romney and Donald Trump teamed up for a Las Vegas fundraiser last night. We've seen this movie before: The straight-laced square goes to Vegas with his outrageous friend and wakes up with a Mike Tyson tattoo, next to a woman who draws a heart over the "i" in her stage name. Romney's general-election strategy has been to allow no distraction from his focus on the economy. Trump's strategy is pure distraction. In neon. Recently he tried to raise --yet another time-- questions about the president's birthplace. Yesterday, Trump put the birthplace question at the center of the election: "@BarackObama is practically begging @MittRomney to disavow the place of birth movement, he is afraid of it and for good reason. He keeps using @SenJohnMcCain as an example, however, @SenJohnMcCain lost the election. Don't let it happen again."

Mitt Romney is a risk-averse politician. His speeches almost never vary. He carefully limits his interactions with the press and sticks closely to the script because, as he explained, specifics can get you in political trouble. So it is notable that the Trump arm-lock is the second risk he has taken in a week. The first was a visit to Universal Bluford Charter School in West Philadelphia, a predominantly African-American neighborhood where there aren't many Republican voters. Now Romney's engaged with Trump, whose obsession with the president's birthplace--and the racial overtones of that quest--undoes the message Romney was trying to send the week before.

Romney's visit to the Bluford Charter School was not a perfect photo opportunity. He was greeted by hecklers and challenged on his education policies by members of the audience, particularly his view that smaller class sizes are not crucial to improving education (a view he appears to share with Obama's secretary of education.) The Obama campaign sent out video of the event to embarrass him, but this was the kind of engagement we should want from our presidential candidates. In a campaign so starved for candor, Romney did something we should encourage in our thoroughly prepackaged and freeze-dried presidential campaign season. He visited a venue that wasn't stocked with prescreened supporters and he said something the audience didn't agree with on an important issue.

Mitt Romney is not likely to get many new African-American votes in Philadelphia when running against an African-American president, but as a Romney adviser confirmed, his visit was also about appealing to moderate and swing voters in the suburbs outside Philadelphia. The event was an attempt to show that Romney is larger than just the candidate who has spent the primaries in the comfortable suburbs where Republican primary voters live. He is committed enough to education that he's willing to visit neighborhoods where Republicans are scarce. Obama isn't working for these kids, says the campaign repeatedly, but Romney will.

The pictures of Romney in his tie and white shirt shaking a series of brown hands were a key part of painting the political tableau. The message is that no matter where you and I come from, I want to help, I want to listen, and you are not foreign to me, even though we come from different worlds.

Now, having engaged in the symbolism of race, Romney meets with Donald Trump, whose fixation on the president's birth origin sends the opposite message: Barack Obama, Trump would have us believe, is something foreign and out of place. When a person fixates on the president's supposed African origins this much, it sends a racial signal: No matter how many present-day challenges require discussion, if you are a black president, someone with power and means is going to use your origins against you.

Romney presumably asks voters to take him at face value when, as a wealthy white guy, he enters an African-American neighborhood. Trump doesn't cut Obama the same break.

Trump insists race is not the issue--"I have a great relationship with the blacks. I've always had a great relationship with the blacks."--but the Romney campaign doesn't have to certify him a stone-cold racist to recognize the totally incongruous clash Trump presents. One week your candidate stands with African-American schoolchildren in earnest concern, and the next week he stands enthusiastically with the most vocal barker of birtherism.

Obama released his long-form birth certificate last year, which showed his birthplace to be Honolulu, Hawaii. Romney has said the issue was a settled matter. When asked about Trump recently, though, his answer suggested that he was braver in speaking truth to the audience in West Philadelphia than he was angering the Donald. "You know, I don't agree with all the people who support me, and my guess is they don't all agree with everything I believe in. But I need to get 50.1 percent or more, and I'm appreciative to have the help of a lot of good people." This was, however, another victory for candor: The need to get to 50.1 percent is the need to do what it takes to win.

Does the Mitt and Donald movie matter politically? Almost certainly not. Romney is not running with Trump, so voters aren't going to get sustained exposure to him. For Romney, Trump is a useful tool. As the Donald himself put it: "Part of the beauty of me is that I'm very rich." He says he's noodling a super PAC, and he can raise money for Romney and gather together other people who can raise money. Romney certainly could never distance himself from Trump (let alone denounce him) for fear of alienating those donors the campaign is trying to reach by offering a dinner with the host of The Apprentice. Trump is probably popular with some of the working-class voters who cheer for a pugnacious loudmouth and whom Romney wants to attract. (That's why Romney used Trump to put a knee to Rick Santorum's groin with robocalls during the Michigan primary.) Elites who sniff at the Trump clown show were lost to Romney already. The only political downside would come if these two recent risks Romney took were to collide somehow. Say, if he does another event like the Bluford Charter School and one of the kids asks him to explain Donald Trump.

Constitution Smackdown!
Remember When the NY Times Suggested Obama Exaggerated About His Drug Use?
Should We Intervene in Syria?