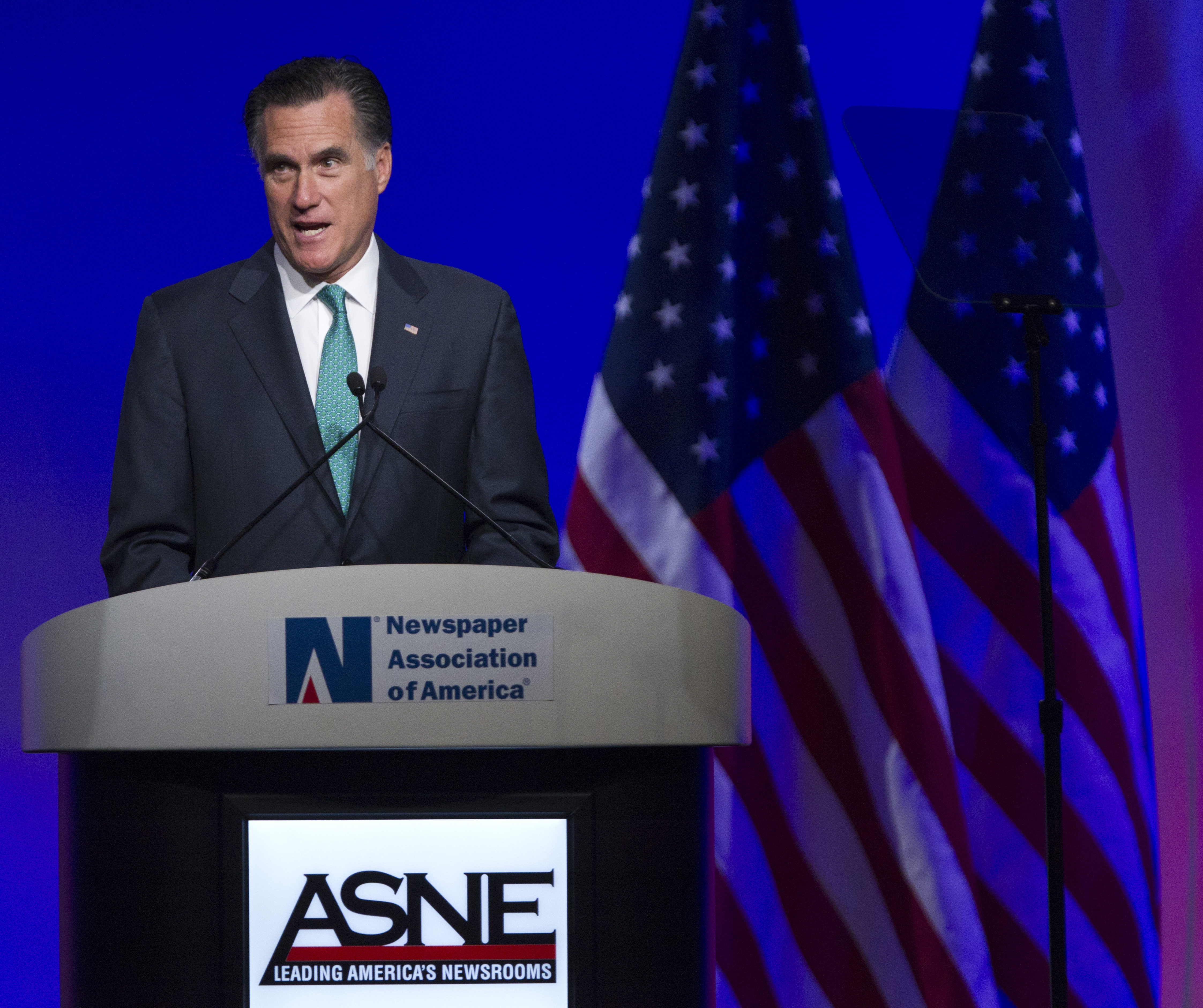 On the heels of three primary victories Tuesday night, Republican presidential front-runner Mitt Romney focused his attention squarely on President Obama in Wednesday remarks, taking aim at the president as a "hide and seek" candidate who operates by the mantra of "what the American public doesn't know won't hurt him," referring to the president.

Romney, speaking before the American Society of News Editors (ASNE) just a day after the president addressed the same group, continued what increasingly looks like a shift in focus on the campaign trail, pivoting his attention toward the general election as he inches ever closer to clinching the Republican nomination.

In his remarks, Romney made reference to his Republican rivals only when asked, and never explicitly called them out by name. Instead, he spent the majority of his time onstage painting contrasts between himself and President Obama - as well as between two contrasting personalities he described as President Obama and the so-called "candidate Obama."

Citing Mr. Obama's hot mic gaffe last week, in which he was unwittingly recorded telling Russian President Dmitry Medvedev he would have more "flexibility" to work with him on missile defense "after my election," Romney questioned the president's motives, wondering, "What exactly does President Obama intend to do differently once he's no longer accountable to the voters? By flexibility, he means that what the American public doesn't know won't hurt him."

Romney went on to compare the president's record to his campaign platform, casting him as a candidate intent on "hiding" his true purpose.

"You and I are going to have to do the seeking," Romney told reporters.

Listing a series of purported discrepancies between the values of President Obama vs. "candidate Obama," Romney argued that Mr. Obama "wants us to re-elect him so we can find out what he will actually do."

"With all the challenges the nation faces, this is not the time for President Obama's hide and seek campaign," he added.

The former Massachusetts governor went on to assail the president for helming what he cast as the "weakest" economic recovery since the Great Depression, and for putting forth "zero" ideas on how to foster economic growth. He specifically decried Mr. Obama's efforts at deficit reduction and creating jobs.

"Then new normal the president would have us embrace is trillion dollar deficits and 8 percent unemployment," Romney said. "I'm offering a clear choice and a different path. And Unlike the President, I have a record that I am proud to run on."

When asked about the perceived gender gap his campaign faces with regard to women supporters when matched up against Mr. Obama, Romney argued that Democrats had been effective so far at "mischaracterizing" Republican values. But, he said, according to his wife Ann, women are focused on the economy above all.

"My wife has the occasion, as you know, to campaign on her own...She reports to me regularly that the issues women care about most is the economy and getting good jobs for their kids and for themselves. They're concerned about gasoline prices," he said. "That's what women care about in this country and my vision is to get America working again, short term and long term."

Questioned about whether or not he had asked his Republican opponents to bow out of the race, Romney joked that "I haven't, but now that you bring it up..."

More seriously, he continued: "I think people are free to make their own decision and respect their right to do so."

"I hope that we're able to resolve our nominating process as soon as possible of course, because I'd like to focus our time and attention to those key battleground states and on raising the funds to be somewhat competitive with the president in his billion dollar quest," he added. "We have a real challenging road ahead of us but I believe we'll rise to the occasion."