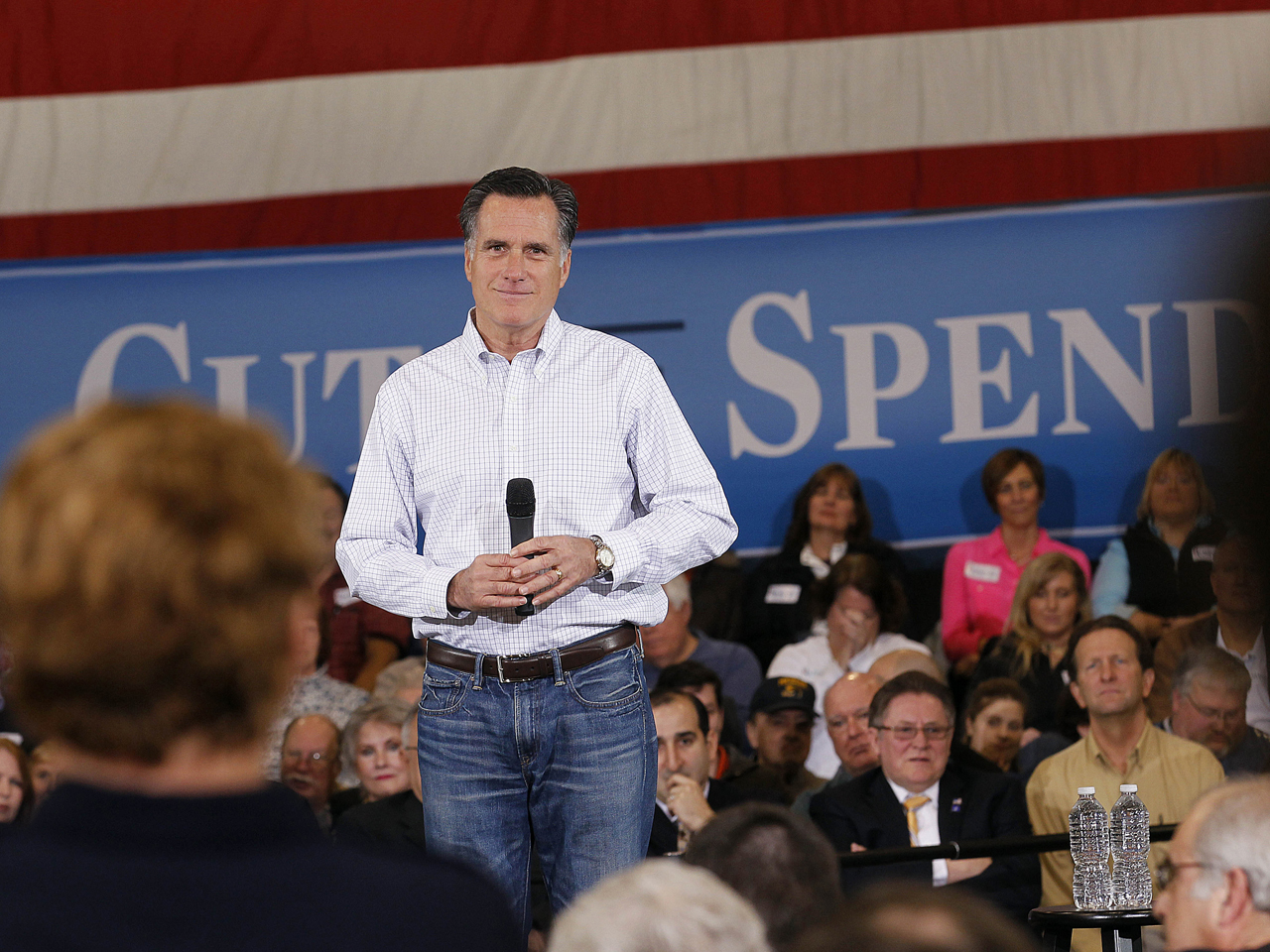 Romney rarely ventures into social issues in his campaign speeches, but people participating in a town hall-style meeting one week before the Michigan primary asked how he would protect religious liberty.

"Unfortunately, possibly because of the people the president hangs around with, and their agenda, their secular agenda; they have fought against religion," Romney said.

The Obama campaign linked Romney's remarks to recent comments by rival Rick Santorum, who has referred to Obama holding a "phony theology" only to say later that he wasn't attacking Obama's faith but the president's environmental views.

"These ugly and misleading attacks have no place in the campaign and they provide a very clear contrast with what President Obama is talking about: how to restore economic security for the middle class and create jobs," said Lis Smith, an Obama campaign spokeswoman.

Religious liberty has been a leading topic in recent weeks because of the Obama administration's mandate that insurance companies provide free birth control even to people employed by church-affiliated organizations, including schools and hospitals. Opponents frame the debate as one of religious liberty while proponents of the mandate say it's about women's health and access to contraception.

Romney hasn't faced voters or reporters very often since Santorum's surge and the rise of social issues in the campaign, largely avoiding questions on the subject. But he's clearly focused on the conservative Republican base that's still skeptical of him, calling himself "severely conservative" during a speech to activists in Washington earlier this month. And his lengthy, detailed answer Tuesday on religious liberty showed clear attention to the issue.

Romney implicitly invoked his own Mormon faith, also rare for the former Massachusetts governor. He said Tuesday that he cares about the issue because he is "someone who has understood very personally the significance of religious tolerance."

He also took questions on gay marriage, Supreme Court appointments and abortion; and when asked about whom he might select as his vice presidential running mate, he listed "pro-life" as the first credential he would look for.

Romney has found himself in an unexpectedly difficult fight in Michigan, his native state and a place where his advisers had long assumed he could do well. He's facing a tough challenge from Santorum, who has excited the GOP base with strong anti-abortion rhetoric and appeals to blue-collar voters.

"I care about Michigan. This is personal for me," Romney said.

The campaign's fundraising has slowed in recent weeks. The multimillionaire former venture capitalist has yet to tap his own fortune, campaign spokeswoman Gail Gitcho said Tuesday.

Romney has stepped his attacks on Santorum in recent days. On Tuesday he argued that tea party voters should prefer him over the former Pennsylvania senator; a renewed focus on the fiscally conservative voters who identify with those groups.

"I think the tea party would find it very interesting that Rick Santorum voted to raise the debt ceiling five times without getting compensating reductions in spending," Romney said, echoing the negative campaign ads his campaign and their wealthy allies are airing in the state.

When one questioner at Romney's town hall stood and introduced himself as someone from the tea party, the crowd cheered.

Romney's focus on those voters shows in his schedule. He's set to address a coalition of tea party groups Thursday in Milford; a rarity for the former venture capitalist, who normally holds events at local businesses. Romney has scheduled just one or two public events per day in recent weeks.

Organizers said Romney, who accepted the invitation last week, will take questions from the crowd. Wes Nakagiri, the chairman of the tea party group, RetakeOurGov, that is hosting the event, said many of the group's members want to "root for the hometown boy" but that most would "prefer somebody else."

"The favored son helps if you are a longtime establishment Republican, knew his father," Nakagiri said. "But it's not going to be the same with people that are newly motivated to get into the process. Tea party people that have gotten into the process in the last two years don't have those relationships and are focused on policy."

There are signs that Romney's campaign has stepped up its outreach to the GOP establishment in the state, a group that he's counting on in the Feb. 28 primary.

After Santorum won contests in Missouri, Minnesota and Colorado, tickets for the Oakland County Lincoln Day Dinner; he was already booked as the keynote speaker; skyrocketed, according to Jim Thienel, the chairman. Romney's campaign hadn't responded to the party's earlier request to have him address the dinner.

After the Santorum victories, Romney's campaign called to say his wife, Ann, would be glad to attend. She spoke, too. Romney grew up in Bloomfield Hills, which is in Oakland County.

Romney himself has shown confidence that he'll win in Michigan. When asked in interviews earlier this week what would happened if he lost, Romney said, "That won't happen."

"We've got a barn burner of a campaign right now here in Michigan," Schuette said, "and Mitt Romney is fighting like an underdog."

Romney left Michigan for Arizona, where he's set to debate his GOP rivals Wednesday night. Arizona also holds its primary Feb. 28. Then he will return to Michigan on Friday to deliver a major economic speech at Ford Field, the NFL football stadium in downtown Detroit.

Romney said Tuesday he'll use the speech to outline his economic plan. He said he will have details on a plan for tax policy, cutting spending and adjusting entitlement programs.