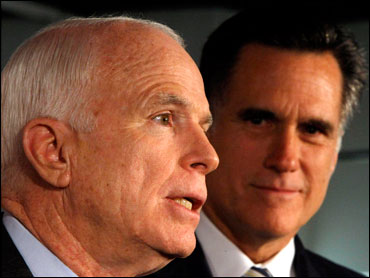 "Even when the contest was close and our disagreements were debated, the caliber of the man was apparent," the former Massachusetts governor said, standing alongside his one-time rival at his now-defunct campaign's headquarters.

Romney collected 166 delegates during his run through the early primaries and caucuses, enough to move McCain close to the total of 1,191 needed to clinch the nomination a full nine months before the November general election.

The officials who disclosed Romney's plans did so on condition of anonymity to avoid pre-empting a formal announcement later in the day. McCain was campaigning in Vermont and Rhode Island, and added a flight to Boston to appear with Romney to accept the endorsement at his waterfront campaign headquarters.

Romney's nod of support capped a bitter yearlong rivalry between the two men over the party's nomination. Romney criticized McCain in television ads in New Hampshire, and both candidates mixed it up almost daily during campaign events and debates. Neither is especially fond of the other.

Over the past year, Romney cast McCain as outside of the GOP's conservative mainstream and a Washington insider who contributed to the problems plaguing a broken system. McCain, in turn, argued that Romney's equivocations and reversals on several issues indicated a willingness to change his positions to fit his political goals.

The clash effectively ended on Feb. 5, when McCain won a string of big-state primaries from coast to coast.

Officials said the former Massachusetts governor made his decision to back McCain earlier in the day, citing a desire to help the Arizona senator wrap up the nomination before too much more time passed and while Democrats still did not have a nominee.

McCain is on a steady march toward amassing the 1,191 delegates he needs, but Huckabee has proven an unexpectedly durable challenger. With a strong appeal to evangelical conservatives, Huckabee defeated McCain in two out of three states that chose delegates last weekend, and ran a far stronger race than expected before losing the Virginia primary on Tuesday.

The senator began the day with 815 delegates, to 199 for Huckabee. Officials say Romney can ask his delegates to support McCain to the extent permitted by state law and party rules.

In a phone interview on CNN, Huckabee maintained he would stay in the race until McCain secured enough delegates to lock up the nomination.

"This election is about, or at least ought to be, about choices and voices, not coronations," he said. "Most people are right now saying it looks like McCain is the inevitable nominee. But I'm not most people. I don't represent these folks that are, again, looking at the 'me too. I'm the leader of the 'not me yet' movement, and that's fine."

He defended his decision to stay in the race, even though McCain and others have asked him to exit for the sake of party unity.

"It's not just out of stubbornnesss," he said. "I listen to the people who got me here. The only people who have told me to quit are the people supporting the other candidates. I've not had my supporters tell me they're ready for us to throw in the towel."

In the next round of voting, Louisiana holds a state convention Saturday in which caucus-goers will help decide how 44 of the state's 47 national convention delegates are split. At stake Tuesday in Wisconsin's primary are 40 GOP delegates.

A former Massachusetts governor, Romney suspended his candidacy last week after it became apparent that toppling McCain would be near impossible to gain the delegates needed to defeat McCain.

In a speech before conservative activists in Washington, D.C., Romney acknowledged the difficulty in overtaking McCain. "I must now stand aside, for our party and our country," he said at the time, adding that doing otherwise would increase the chances that Democrats would reclaim the White House.

At the time, Romney did not offer an endorsement, and McCain said he did not seek one when the two spoke by telephone.

Romney was the only one of McCain's main primary opponents who had resisted lining up behind the nominee in waiting; Rudy Giuliani and Fred Thompson both have endorsed him.