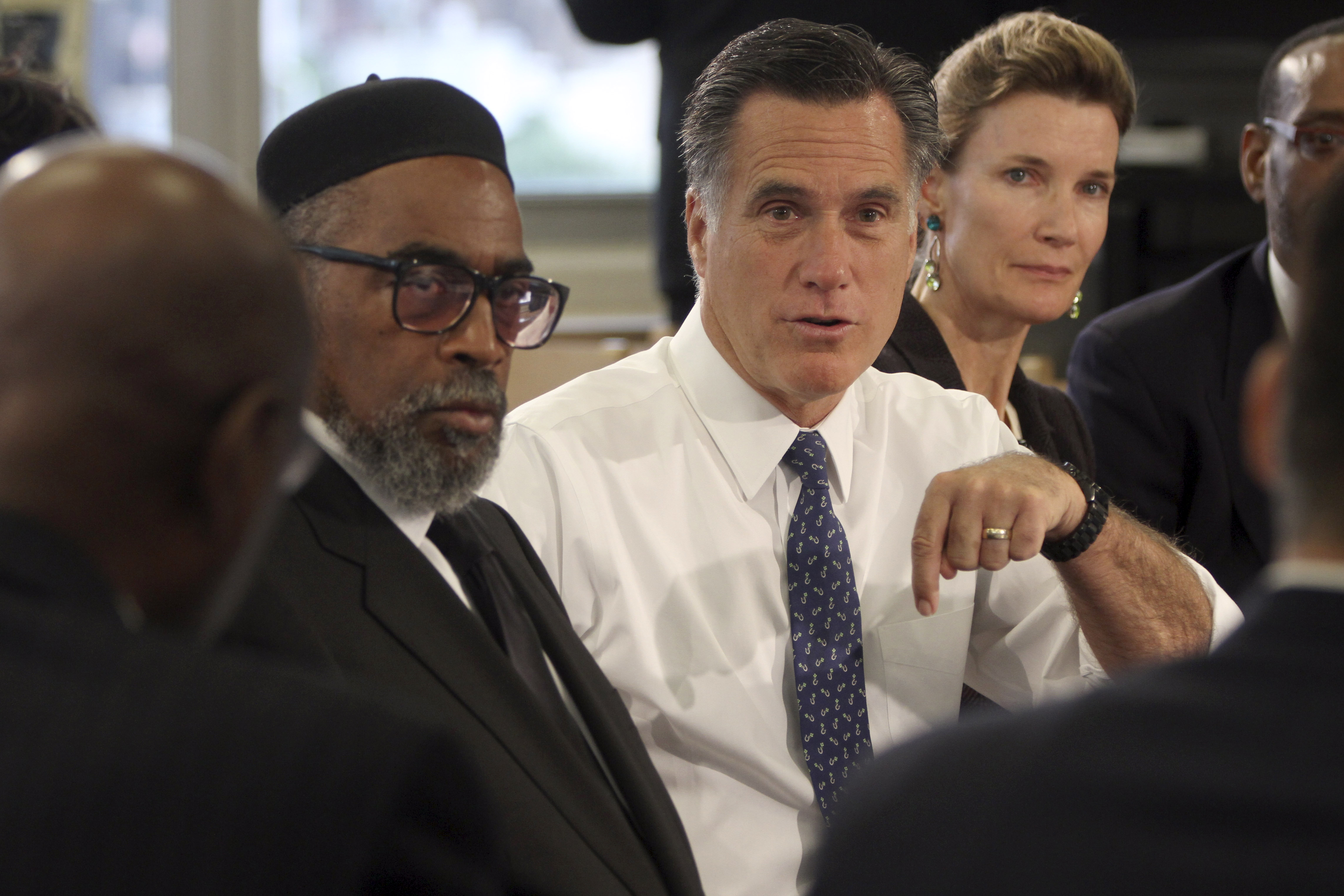 PHILADELPHIA -- Mitt Romney visited a charter school in a struggling African-American neighborhood here on Thursday and ran into some pushback from educators and protesters who took issue with his ideas on class size and the role of families in successful school systems.

The presumptive Republican presidential nominee's visit to the Universal Bluford Charter School, which has shown signs of success, came a day after he proposed that poor and disabled students should be allowed to attend the school of their choice with federal dollars following them to that school.

At a roundtable with 11 teachers and administrators, Romney said the achievement gap between minority and non-minority students is "the civil rights issue of our time," and that it was roughly cut in half in Massachusetts while he was governor. He said his tenure as governor had shown him three key features to successful school systems: great teachers, two supportive parents, and sound leadership at the schools.

Romney acknowledged that the two-parent situation wasn't an option for all children. "For a single mom living in a shelter with a couple of kids - those kids are at an enormous disadvantage - there's no question about that," Romney said. But he argued that teaching about the advantages of raising children in a two-parent environment would help the chances of the next generation.

"If we're thinking about the kids of tomorrow," he said, "trying to help move people to understand, you know, getting married and having families where there's a mom and a dad together has a big impact. That's, in my view, that's critical down the road for those that are already in a setting where they don't have two parents."

A couple of roundtable participants were skeptical that the problem of single-parent households could be changed through teaching at schools. "We'll never get to that second point you described about having a two-parent situation," said Abdur-Rahim Islam, head of a consulting company that is helping improve Philadelphia schools.

The educators also challenged Romney's contention that smaller class sizes don't appear to be key to improving student performance. He told the group about gathering information from 351 cities and towns in Massachusetts when he was governor to compare class size to student performance. An analysis found no relationship between smaller class sizes and better performance. "As a matter of fact, the district with the smallest classrooms - Cambridge - had students performing in the bottom 10 percent. So just getting smaller classrooms didn't seem to be the key," Romney said.

But Stephen Morris, a teacher at Universal Bluford, said that his experiences had proven the opposite. "I can't think of any teacher in the whole time I have been teaching, 13 years, who would say that more students [in the classroom] would benefit," Morris told Romney. "And I can't think of a parent that would say I would like my teacher to be in a room with a lot of kids and only one teacher. So I'm wondering where this research comes from."

Technology teacher Ronald Benner agreed. "You can give more personalized attention to each student if you have a smaller class size," he said.

Romney countered with another study done by the consulting firm McKinsey & Co. that found classroom size was not driving the success of schools around the world. He said it concluded the keys were "very involved" parents, excellent teachers, and good administrators.

Still not convinced, David Hardy, the CEO at a nearby charter school, brought up what he called "a definitive study about class size" by the University of Tennessee. "And what they said was that in first through third grade, if the class size is under 18, those kids stay ahead of everybody else all the way through school," he said.

Outside the school where Romney's campaign bus was parked, Philadelphia Mayor Michael Nutter and District Attorney Seth Williams held a press conference in front of about 50 sign-waving Obama supporters organized by the Obama campaign. Nutter was dismissive of Romney's record as governor, pointing to teacher layoffs and education budget cuts during his tenure. "Romney's Massachusetts record is not a model for a nation," Nutter said. "We can't afford wrong-way Romney."

Williams said he had not invited Romney to the neighborhood. "I am glad the Republican candidate has come to West Philadelphia," Williams said, "but instead of just talking at the school and getting back on his huge bus, he should come out, he should walk 60th Street" to understand "real Americans" who live in urban America.

An earlier version of this story misattributed remarks by Stephen Morris and David Hardy.