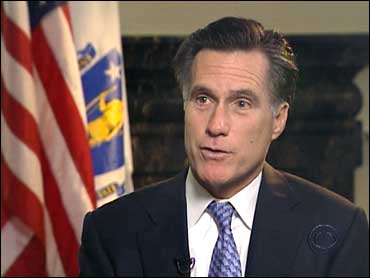 Gov. Mitt Romney has apologized for referring to the city's troubled highway commuter tunnel project as a "tar baby" during a fundraiser with Iowa Republicans, saying he did not know anyone would be offended by the term some consider a racial epithet.

In a speech Saturday, Romney, a Republican considering a run for president in 2008, acknowledged he took a big political risk in taking control of the project after a fatal tunnel ceiling collapse, but said inaction would have been even worse.

"The best thing politically would be to stay as far away from that tar baby as I can," he told a crowd of about 100 supporters in Ames, Iowa.

Black leaders were outraged at his use of the term, which dates to the 19th century Uncle Remus stories by journalist Joel Chandler Harris. The term refers to a doll made of tar that traps Br'er Rabbit, the main characters in the series of stories. It has come to be known as a way of describing a sticky mess — and has been used as a derogatory term for a black person.

"He thinks he's presidential timber," Jones said. "But all he's shown us is arrogance."

"He was unaware that some people find the term objectionable and he's sorry if anyone's offended," Fehrnstrom said.

White House spokesman Tony Snow sparked similar criticism in May when he used the term in response to a question about government surveillance.