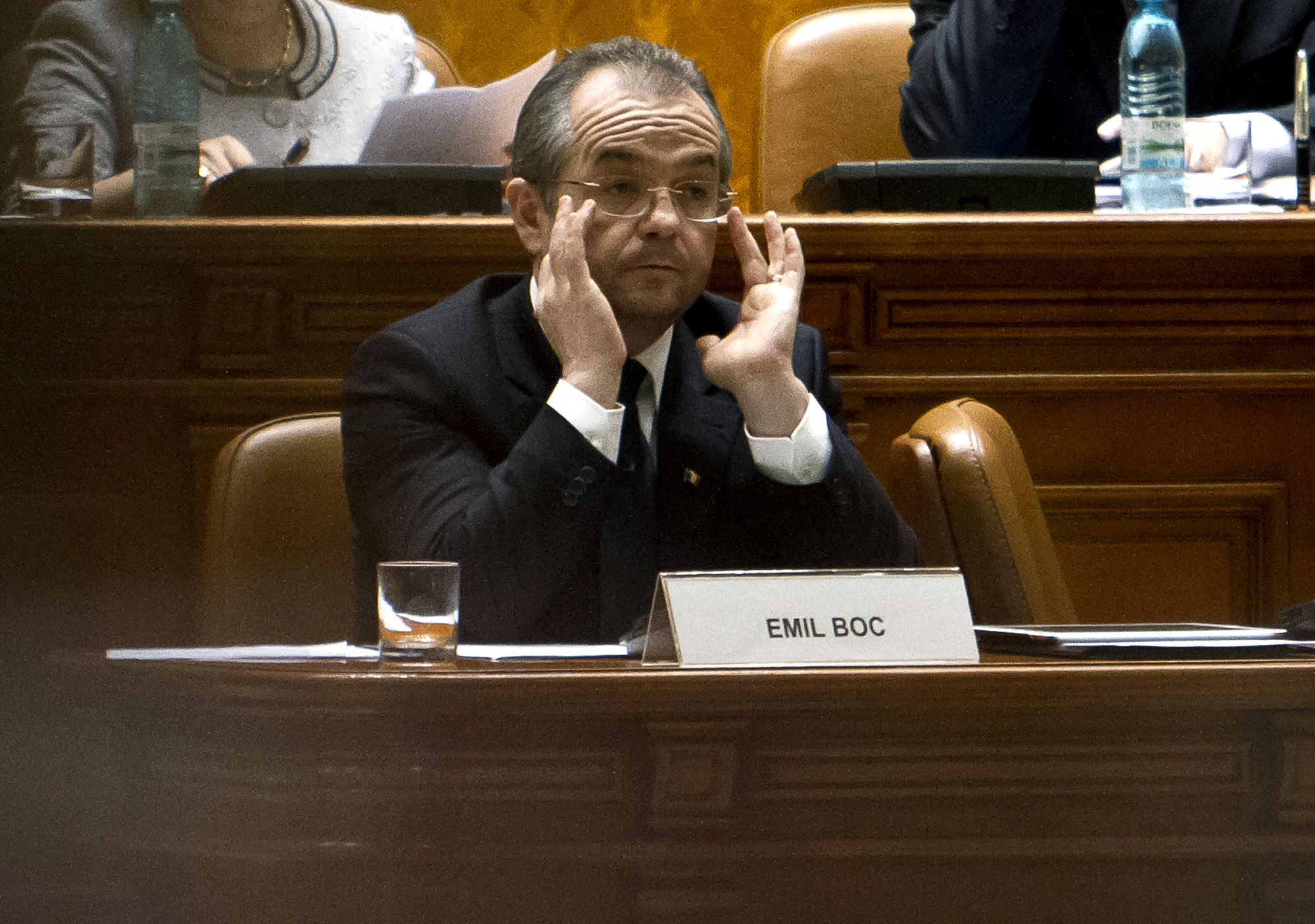 Emil Boc, who had been prime minister since 2008, said he was resigning "to defuse political and social tension" and to make way for a new government. Thousands of Romanians took to the streets in January to protest salary cuts, higher taxes and the widespread perception that the government was not interested in the public's hardships in this nation of 22 million.

President Traian Basescu quickly appointed Justice Minister Catalin Predoiu, the only Cabinet member unaffiliated with a political party, as interim prime minister to serve until a new government is approved.

Basescu also nominated Mihai Razvan Ungureanu, the head of Romania's foreign intelligence service, as the country's new prime minister and asked him to form a Cabinet. Parliament must approve Ungureanu and his ministers in 60 days, or it and the legislature will be dissolved and new elections held.

Boc's party and his allies still have a majority in Parliament, but opposition parties late Monday called for Basescu to resign and for early parliamentary elections to be scheduled now.

In a brief statement Ungureanu, a former foreign minister, said his priority as prime minister would be "the economic and political stability of Romania." He is considered a loyal ally of Basescu and pro-American in his outlook.

But the opposition said it opposes Ungureanu and that it will continue the boycott of Parliament it began last week. "We are not going anywhere with this new government," said Crin Antonescu, head of the opposition Liberal Party.

Boc's resignation came as Romania is starting to feel the effects of the widespread cuts that the government put in place in exchange for a euro20 billion ($26 billion) loan from the International Monetary Fund, the European Union and the World Bank in 2009, to help pay salaries and pensions after its economy shrank by more than 7 percent.

In 2010, Boc's government increased the sales tax from 19 percent to 24 percent and cut public workers' salaries by a quarter to reduce the budget deficit.

Jeffrey Franks, the head of the IMF mission to Romania, said Sunday he is confident that economic reforms the fund demanded in exchange for the loan would continue, even if the current government steps down.

He said had taken "difficult decisions thinking about the future of Romania, not because I wanted to, but because I had to."

Christian Mititelu, a political commentator and former head of the BBC Romanian service, said: "There is a lot of resentment. The austerity measures seem to have penalized those who worked for the state, retirees and people who depended on social security."

Political commentator Radu Tudor said Boc's resignation was merely a ploy by the president to boost the election chances of the governing Democratic Liberal Party, which Basescu used to lead, by getting rid of an unpopular government.

Basescu was elected president in 2004 and his mandate expires in 2014. Parliamentary elections are currently scheduled for November.

Romania's problems go deeper than its economic woes. Strong hostility between the government and opposition parties is reflected daily in the media. Opposition politicians and journalists who are critical of the government claim they are harassed.

Basescu, who has been criticized for being outspoken and confrontational, has said he is committed to reform and is openly disdainful of the opposition. He has been credited by the IMF for his reforms and attempts to fight corruption.

"This is a victory for those that demonstrated on the streets," said Antonescu. "The most corrupt, incompetent and lying government" since the 1989 anti-communist revolt has gone, he said.

Victor Ponta, the leader of the opposition Social Democracy Party, said he would ask Basescu to call early elections.

"I know that I made difficult decisions, but the fruits have begun to appear," he said in a statement. "In times of crisis, the government is not in a popularity contest, but is saving the country."

Romania has announced plans to join the eurzone by 2015, even though as he served in office Boc saw the region's financial crisis bring down governments in Greece, Italy, Ireland and Portugal.