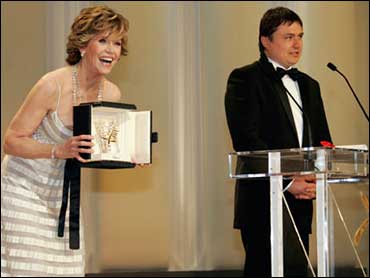 The low-budget, naturalistic film about a student who goes through horrors to ensure that her friend can have a secret abortion beat out 21 other movies in competition for the Riviera festival's top prize, the Palme d'Or -including films by well-known directors like Quentin Tarantino, the Coen brothers and Wong Kar-wai.

Mungiu, who was awarded the prize by actress Jane Fonda, said he did not have the idea for the film a year ago, and did not even have money to shoot it just six months ago. He hoped the win would be "good news for the small filmmakers from small countries."

"You don't necessarily need a big budget and big stars to tell a story that everyone will listen to," said 39-year-old Mungiu, the first Romanian to win Cannes' top prize.

The movie lineup for Cannes' 60th anniversary edition was weighty, with recurring themes like death, abortion, loss and aging, and the awards announced by jury president Stephen Frears ("The Queen") reflected that.

While Mungiu's film was a favorite with critics, the grand prize, considered the festival's No. 2 award, was a surprise. It went to Japanese director Naomi Kawase's "Mogari No Mori" (The Mourning Forest), a movie about two people - a retirement home resident and a caretaker at the center - struggling to overcome the deaths of loved ones.

The prize for best director went to American painter-director Julian Schnabel for his French-language film "The Diving Bell and the Butterfly," based on a memoir by a French magazine editor who became paralyzed after a stroke and learned to write again by painstakingly blinking his eyelid. The movie is Schnabel's third, after "Basquiat" and "Before Night Falls."

The jury awarded a special prize for Cannes' 60th anniversary to
Gus Van Sant, who won the festival's top prize in 2003 for "Elephant."

The "Good Will Hunting" director's impressionistic "Paranoid Park" focuses on a teenage skateboarder whose life turns upside down when he accidentally kills a security guard. Van Sant recruited untrained actors on MySpace.com and shot the film in just a few weeks.

Two films shared the jury prize: "Persepolis," Marjane Satrapi's moving, funny adaptation of her graphic novels about growing up during and after Iran's 1979 Islamic Revolution, which she co-directed with Vincent Paronnaud; and "Stellet Licht" (Silent Light), Carlos Reygadas' tale of forbidden love set among Mennonite farmers of northern Mexico.

Acting honors went to Russia's Konstantin Lavronenko, who played a troubled husband in "The Banishment," a Russian drama about a couple whose marriage disintegrates during a stay in the country.

South Korea's Jeon Do-yeon won the award for best actress for her role as a widow struggling to cope with her husband's death in "Secret Sunshine."

German director Fatih Akin's "The Edge of Heaven," was a big favorite at Cannes and took the prize for best screenplay. Akin both wrote and directed the film, a German-Turkish cross-cultural tale of loss, mourning and forgiveness, and a followup to his critically acclaimed "Head On," which won the Berlin festival's top prize in 2004.

One film hailed by critics was glaringly absent on awards night: the Coen brothers' "No Country for Old Men," a bloody, darkly funny and troubling tale about a ruthless killer in west Texas.

Several high-profile movies that screened at Cannes were not in the running for prizes, including Michael Moore's "Sicko," caper flick "Ocean's Thirteen" and "A Mighty Heart," starring Angelina Jolie as the widow of slain journalist Daniel Pearl.

In a big weekend for Romania, another film from the country took honors at Cannes in a secondary competition called "Un Certain Regard." Director Cristian Nemescu died in a car crash last year at age 27, leaving his "California Dreamin"' incomplete. Jurors had initially decided not to judge the film, about American soldiers in a small Romanian village, but changed their minds when they saw it.