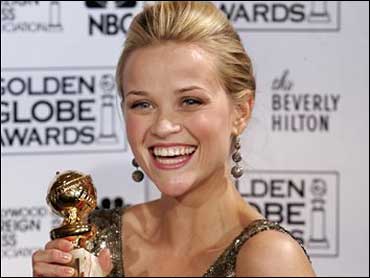 Phoenix and Witherspoon won for best actor and actress in a movie musical or comedy for the biopic that follows country legend Cash's career and his long courtship with the love of his life, June Carter.

The Globe audience clapped along to Cash's song "I Walk the Line" as Phoenix took the stage.

"Who would ever have thought that I would win in the comedy or musical category?" said Phoenix, poking fun at his image for dark, brooding roles. "Not expected."

Phoenix, who did his own singing in the film, thanked "John and June for sharing their life with all of us."

"This film is really important to me," said Witherspoon, who offers a spirited performance and fine singing as Carter. "It's about where I grew up, it's about the music I grew up listening to, so it's very meaningful."

"I think this has been an amazing year for American cinema," Lee said. "So I just want to give my first thanks to my fellow filmmakers for strengthening my faith in movies."

Also in the drama category - actress Felicity Huffman won an award for her gender-bending role in the film "Transamerica," where she portrayed a man who was undergoing a sex-change operation.

"I know as actors our job is usually to shed our skins, but I think as people our job is to become who we really are and so I would like to salute the men and women who brave ostracism, alienation and a life lived on the margins to become who they really are," Huffman said.

"Syriana" spins a convoluted story of multiple characters caught up in a web of deceit, greed, corruption and power-brokering over Middle Eastern oil supplies. Clooney plays a fiercely devoted CIA undercover agent who comes to question his country's actions in the region.

Clooney thanked writer-director Stephen Gaghan for a movie "that asks a lot of difficult questions."

There are similar corporate undertones to "The Constant Gardener," in which Weisz plays a humanitarian-aid worker whose husband (Ralph Fiennes) is drawn into a dogged investigation of business interests connected to her murder.

"Brokeback Mountain" won the screenplay award for Larry McMurtry and Diana Ossana. McMurtry thanked his constant companion during the lonely process of writing.

"Most heartfelt, I thank my typewriter. My typewriter is a Hermes 3000, surely one of the noblest instruments of European genius," McMurtry said.

The Palestinian film "Paradise Now," a dark tale of two Arab friends tapped to carry out a suicide bombing in Israel, won the prize for foreign-language film.

Television winners included Geena Davis for best drama series actress as the U.S. president in "Commander in Chief," Hugh Laurie for drama series actor as a cranky, pill-popping doctor in "House," Steve Carell for best comedy series actor as an incompetent boss in "The Office," Jonathan Rhys Meyers for miniseries or movie actor as Elvis Presley in "Elvis," and S. Epatha Merkerson for miniseries or movie actress as a boarding house proprietor who takes in an outcast teen in "Lackawanna Blues."

"This is really wonderful for a fledgling little show like ours," said Davis, who added that a little girl coming into the Globes stopped her to say, "Because of you I want to be president some day.

"Well, that didn't actually happen," Davis joked. "But it could have."

The Globes are awarded by the relatively small Hollywood Foreign Press Association, which has about 80 members, compared with the 5,800 film professionals eligible to vote for the Oscars.

Wins at the Globes typically add steam to industry buzz about who is likely to win an Academy Award. The Oscar nominations come out Jan. 31 and the awards are to be presented on March 5.