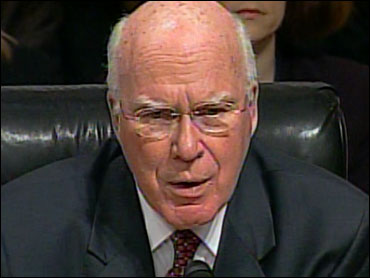 
The three "leaders" of the Democratic Party – DNC chair Howard Dean, House minority leader Nancy Pelosi and Senate minority leader Harry Reid – all came out against the nomination of John Roberts for chief justice of the Supreme Court. Of course, of the three only Reid has a vote and he made it clear that he was speaking for himself and not his caucus.

How right he was.

Reid's surprise announcement on Tuesday that he was going to vote "no" on Roberts signaled to a lot of the liberal groups who worked to oppose the nomination that they were about to get a moral if not a real victory. They expected some defections from red state Democrats like Tim Johnson and Ben Nelson, but with Reid on board they started to think they had made their case that Roberts was too risky and believed that the opposition could go over the 35 vote mark.

But on Wednesday morning, the balloon burst. Sen. Patrick Leahy, a solid Democrat with a 100 percent ADA rating from the very blue state of Vermont, announced that he would vote to support Roberts. The activists were stunned.

As they listened to Leahy speak, the liberals thought he was going their way. Ralph Neas, president of the People for the American Way, said "Senator Leahy eloquently made all the arguments against the confirmation of Judge Roberts, and then made a decision that contradicted his own compelling reasoning. His decision was inexplicable, and deeply disappointing."

Leahy said his decision to roll the dice with Roberts was based on conscience. It would be easy for him, given his state, to vote "no," but he decided he felt good enough about Roberts to give him the benefit of the doubt that he is not an ideologue.

It is a tribute to Leahy that most of the groups were upset but not personally vitriolic. A few groups put out statements opposing the decision but many just said quietly that they were perplexed and disappointed. Privately, they talked about Leahy's susceptibility to opinions of media elites who have fallen in love with the smooth Roberts. But they said they felt that Leahy really thought hard about this and seemed comfortable that Roberts wouldn't double cross him.

Another factor persuading some Democrats that Roberts is not a hardcore conservative is that a few Republican senators have expressed some doubts about him as well. In fact, Sen. Arlen Specter floated the idea of holding off on appointing a successor to Sandra Day O'Connor for a year until Roberts had established himself as chief.

The Leahy curveball had liberal activists in a tizzy on Wednesday about the one woman member of the committee, Diane Feinstein. Unlike her California colleague Barbara Boxer, Feinstein is not a predictable liberal vote. On Tuesday night, her San Francisco colleague Rep. Nancy Pelosi put out a statement strongly opposing Roberts, and eventually Feinstein came through. But the two Democrats from Wisconsin, Herb Kohl and Russ Feingold, joined Leahy in voting "yes." Hillary Clinton remains mum.

The two schools of thought inside the Democratic caucus about the politics of this vote and about Roberts himself are intriguing. The liberal groups, Sens. Kennedy, Kerry, and others see Roberts' answers as evasive and deliberately filled with wiggle room on basic issues. Others, like Leahy and Feingold, see Roberts as non-ideological. On the politics, those opposing Roberts argue that the best way to get a less conservative appointee for the O'Connor seat is to show strength in opposing Roberts. The others think that by giving in on Roberts they have cover to oppose the next one. But one Democratic consultant suggested to me on Wednesday that if the next appointment is a Hispanic or female or both these Democrats have put themselves in the position of rolling over for the white establishment male and then beating up on the minority appointee.

The focus has turned to the O'Connor seat. Conservatives are pushing the president to appoint a reliable vote on the right. Pat Buchanan says the way for President Bush to regain his credibility is to name "another Scalia." He wrote in Human Events that for Bush to name a centrist would "be an act of appeasement that would break the hearts of his constituency." Other conservatives have pointed out that the president promised to name someone in the tradition of Scalia and Thomas in his 2000 campaign and that Roberts doesn't appear to fit that description.

Roberts, despite the glowing words of the editorial writers about his qualifications, remains a judicial unknown with only two years experience on the bench. Senators on both sides of the aisle have decided to roll the dice, but some will undoubtedly be surprised when he fills in the blanks.