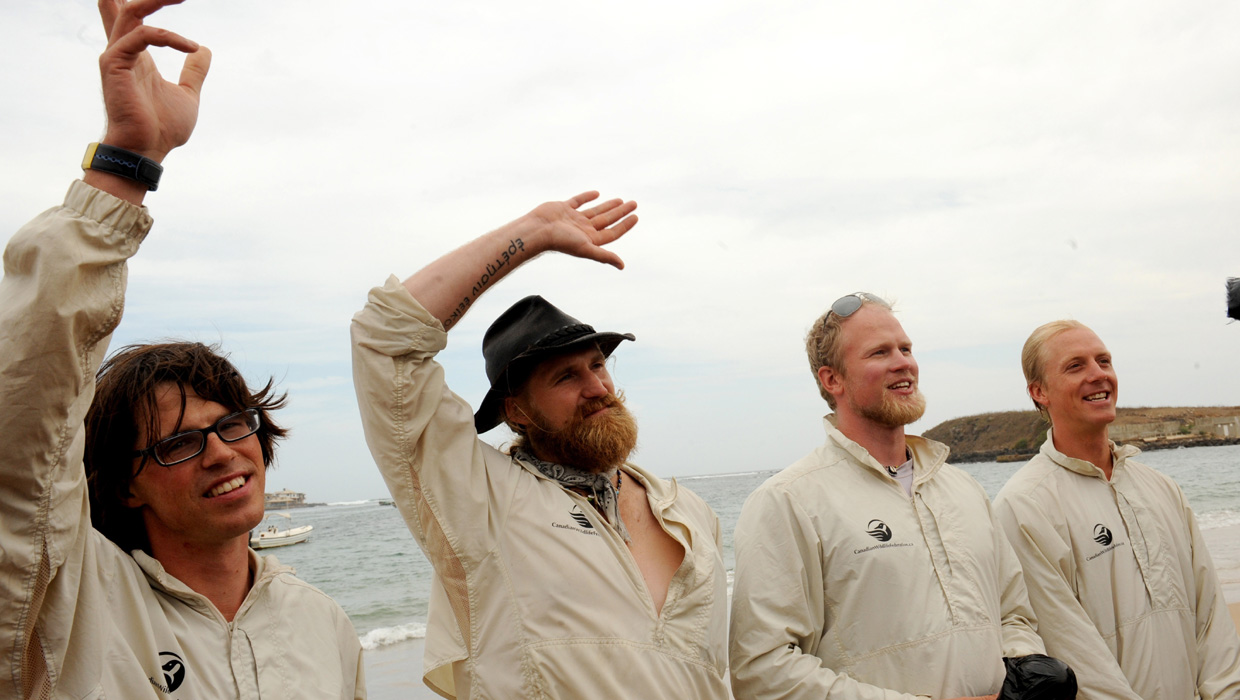 KINGSTON, Jamaica Two Canadians and two Americans attempting to set a world record for an unassisted, human-powered row across the Atlantic Ocean have been rescued after a rogue wave capsized their boat after 73 days at sea, the U.S. Coast Guard and organizers said Sunday.

The four endurance rowers, including Canadian Olympic medalist Adam Kreek, were rescued from waters some 400 miles north of the U.S. Caribbean island of Puerto Rico. They were attempting to row more than 4,000 miles between the West African nation of Senegal and Miami and set a Guinness World Record.

But after weeks of battling rough weather, a couple of shattered oars and various technological headaches, the adventurers were forced to take to a life raft early Saturday after their ocean rowboat "James Robert Hanssen" overturned and could not be righted. They donned life jackets and set off a personal locator beacon.

Coast Guard crews located the men a few hours after getting a distress signal on Saturday morning and an 800-foot cargo ship later picked up the rowers. They were all in good health and were heading for Puerto Rico on the Panamanian-flagged "Heijin" cargo ship on Sunday.

"For just about the entire trip, except for about eight days, the weather and conditions did not match up with the expected models and predictions. So it was a bit of a slog for a good portion of the whole trip," said Greg Spooner, land operations chief for Seattle-based OAR Northwest, which organized the trans-Atlantic attempt sponsored by the Canadian Wildlife Federation.

Even so, Spooner said, the rowers reported that the last week had progressed relatively smoothly, so it was a shock when he was notified by the Coast Guard that their boat had overturned and the four had been rescued.

The boat carrying the four rowers - Kreek, fellow Canadian Markus Pukonen and Seattle's Patrick Fleming and Jordan Hanssen - was outfitted with communication devices and a wind turbine that powered batteries, including one for desalinating sea water. But early on in the expedition, the turbine failed to spin correctly and power had to be carefully rationed.

"That meant on some days choosing to make water or keeping your communications equipment on so ships could see you," Spooner said by phone on Sunday.

On Friday, a day before the capsizing, the crew tweeted about an intense lightning storm.

"Lightning storm passed over us yesterday. Jordan's beard was rising to the sky and glowing, and both antennas were glowing at their tips. Lots of loud thunder and intense eye-shattering lightning. Wow. Crazy freaky!" they wrote.

Shortly before the capsizing, Pukonen wrote humorously in an online journal on OAR Northwest's web site about sleeping in shifts and struggling to wake up for two more hours of methodical rowing.

"My alarm is usually a shake on the shoulders. A name call used to work, but as the row has progressed, the use of force has become necessary (sometimes a good 10 seconds of shaking to wake people up)," he quipped.

Spooner said it was unfortunate having to abandon the expedition in the home stretch, some 850 miles from their finish line in Miami. But he said that the journey, which was also an educational and scientific mission, succeeded in many ways. Thousands of students in schools across North America participated in the expedition's free curriculum and the endurance rowers collected data researching marine conditions in the Atlantic that scientists can use free of charge, he said.

"Despite losing the boat, despite having to rescue the guys, there's still great success behind the expedition," Spooner said.