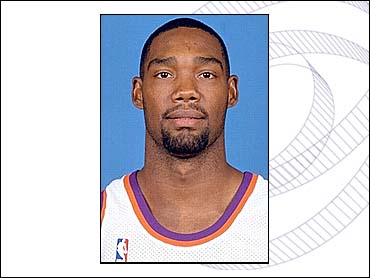 Rodney Rogers, soured by years of losing with the Los Angeles Clippers, capped his season of renewal Monday as the overwhelming choice for the NBA's Sixth Man Award.

The Phoenix Suns' forward received 104 of a possible 121 votes from a panel of sports writers and sportscasters.

"It's sort of like Shaq for MVP," Suns coach Scott Skiles said, referring to Shaquille O'Neal's expected runaway with that award. "I almost feel like, how could anybody vote for anyone else?"

Rogers received 86 percent of the votes, the second-largest percentage in the 18 years the Sixth Man Award has been presented. Cliff Robinson, now Rogers' teammate, received 90.8 percent of the votes for the award when he was with the Portland Trail Blazers in 1992-93.

Four unhappy seasons with the Clippers left Rogers embittered and disillusioned, attitudes that vanished once he joined the Suns.

"All I wanted to do was come in and be a winner and not lose all the time," Rogers said. "I'd been losing my whole career."

Rogers, who signed a free-agent contract with Phoenix for the $2 million exception allowed over the salary cap, averaged 13.8 points and 5.5 rebounds in 27.9 minutes per game for the Suns.

The 6-foot-7 forward was a threat inside and outside. He was fourth in the NBA in 3-point field goal percentage at .439.

The Suns were 35-11 in games in which Rogers scored at least 13 points.

"Everybody wants to start but everybody can't start," Rogers said. "My main thing always has been if you're in there when the game is on the line, that's more important than starting, when you can help your team win ballgames."

Rogers is the third Suns player to win the award, joining Danny Manning in 1998 and Eddie Johnson in 1989.

Skiles, an assistant to coach Danny Ainge when the Suns decided to sign Rogers, didn't expect him to be this good. With the Clippers, Rogers had a reputation of being overweight and lazy.

"I had my doubts just from reputation," Skiles said. "But it was clear from the beginning that Rodney was nothing like his reputation had been. He is such a great teammate, everybody likes him so much and he works so hard.

"He's a guy you're genuinely happy for when anything good happens to him because he's really good guy."

Far from lazy, Rogers missed only one practice all season. He was the only Phoenix player to appear in all 82 games, 75 of them as a reserve.

"When you're losing, a lot of things happen," Rogers said. "You get very frustrated. Sometimes you get a temper, those sorts of things. Like I said, I fell into a lot of bad habits playing with Denver and the Clippers, falling into that category where you're always supposed to lose.

"Coming here I had to change my whole attitude."

Rogers' bad experience in Los Angeles turned worse in his final season, when he was relegated to sparse playing time off the bench.

"They were trying to do whatever they could to hurt me," he said, "so I had to just sit there and rot until the season was over. I was just glad there were a lot of teams interested in me and Phoenix stepped up to the plate."

Skiles kept Rogers as a reserve even when Tom Gugliotta went down with a season-ending knee injury. Instead, rookie Shawn Marion got the starting job.

"Obviously, Rodney deserved to be a starter," Skiles said, "but I just felt naked without having him come off the bench, and he totally understood that. The way he's accepted that, coming off the bench and still being productive, that's not an easy thing to do.

"And obviously he's done it better than anybody."