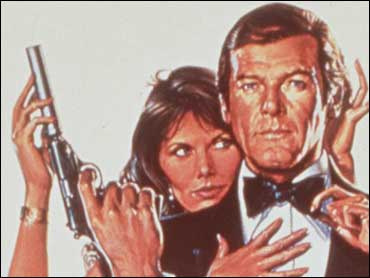 Riding fast cars and saving damsels in distress with poise and charm -- all in day's work -- is worthy of Hollywood star on Hollywood Boulevard.

Best known for playing James Bond on the big screen, Roger Moore now has a star on the Hollywood Walk of Fame in front of an address that includes the spy's signature 007.

Moore, 79, received his permanent spot on Hollywood Boulevard on Thursday, accompanied by friends and family.

Moore made seven Bond films, starting with "Live and Let Die" in 1973 and ending 12 years later with "A View to a Kill." The British actor paid homage to the number of women he kissed on-screen adapting Ian Fleming's leading man.

"Sadly, I had to retire from the Bond films," Moore said. "The girls were getting younger or I was just getting too old."

Moore has done some acting in film and television since leaving the Bond franchise. He has raised funds for UNICEF in underdeveloped countries and received a Commander of the British Empire award from the British government in 1999. He also was awarded a knighthood in 2003 for his work with UNICEF.

Moore's star sits in front of 7007 Hollywood Boulevard, an ice cream parlor that boasts to be the birthplace of the hot fudge sundae.

Pierce Brosnan is the only other actor who played Bond on the big screen to receive a star on the Walk of Fame.

Moore's love life was similar to Bond's short-lived love affairs by having three wives. He had two sons and a daughter from his second wife, Luisa Mattioli.