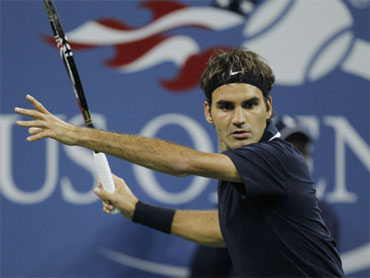 For one match at least, Roger Federer was back to his old self. Back to beating Robin Soderling, and back to being a Grand Slam semifinalist — two things he used to do with such regularity.

Treating the whipping wind and his familiar foe as only slight nuisances, 16-time Grand Slam champion Federer served his way to a convincing 6-4, 6-4, 7-5 victory over the fifth-seeded Soderling in the U.S. Open quarterfinals Wednesday night.

Federer had an 18-2 edge in aces against the big-hitting Soderling, mixing speed with pinpoint placement that kept the Swede guessing.

"I've been practicing my serve a whole lot, for my whole career. If I can't serve in the wind, I've got a problem, you know?" Federer said. "You could probably wake me up at 2 in the morning, or 4 in the morning, and I could hit a few serves."

The victory improved his career mark against Soderling to 13-1. The lone loss was in their previous match, in this year's French Open quarterfinals. Soderling's victory there ended Federer's streak of reaching the semifinals at a record 23 consecutive major tournaments.

Federer then lost in the quarterfinals at Wimbledon, too, prompting some to question whether his best days were behind him. But now, a month after his 29th birthday, he is back in the semifinals at a Grand Slam tournament — one that he has won five times.

Federer has won 45 of his last 46 matches in Flushing Meadows, the one exception the 2009 final against Juan Martin del Potro.

Now Federer will meet third-seeded Novak Djokovic in the semifinals for the third U.S. Open in a row. It's also the fourth consecutive year they'll play each other in New York, dating to the 2007 final, and Federer is 4-0 in those matches.

"You never know what's going to happen," 2008 Australian Open champion Djokovic said after beating 17th-seeded Gael Monfils of France 7-6 (2), 6-1, 6-2 earlier Wednesday. "I don't want to think about those losses in the last three years, which were really, really close."

All of the day's matches were filled with wind that gusted at up to 30 mph, sending all sorts of debris — brown napkins; plastic bags; players' towels — rolling on the court like tumbleweed, forcing points to be stopped and repeatedly making players catch their ball tosses.

About a half-dozen lets were called during top-seeded Caroline Wozniacki's 6-2, 7-5 victory over 45th-ranked Dominika Cibulkova in the last women's quarterfinal.

"This felt like playing in a hurricane or something," said Wozniacki, who is 19-1 since Wimbledon and has won her past 13 matches.

Zvonareva was perfectly steady — in her mind and with her strokes — and beat 31st-seeded Kaia Kanepi of Estonia 6-3, 7-5 in Wednesday's first singles match.

A year ago in New York, during a fourth-round loss, Zvonareva wasted six match points and threw a tantrum right there on court. She bawled. She slammed her racket against her leg. She begged the chair umpire to get her a pair of scissors so she could cut tape off her knees.

And Wednesday? No. 7 Zvonareva was calm and composed, letting Kanepi make mistake after mistake, 60 unforced errors in all. Zvonareva finished with only 28.

"Yeah, it was blowing in every way," Kanepi said after falling to 0-3 in major quarterfinals.

All of her stray shots allowed Zvonareva to take 84 points despite hitting only 10 winners. The first game of the match set the tone: Zvonareva needed five points to break Kanepi, and all five came courtesy of unforced errors.

"Well, I don't think she was just making errors for no reasons. I was making it difficult for her," said Zvonareva, who turned 26 on Tuesday. "She had to go more for her shots. I was trying to guess where she was playing and reading her game."

Neither afternoon match featured much drama — nor doubt about who would win. In sum, they felt akin to opening acts before Wednesday's featured performers took the stage under the lights.

First came Wozniacki-Cibulkova, with Donald Trump in attendance, his hair getting whipped by the wind.

"He called my agent and asked if there was going to be a space in my box," said Wozniacki, who made only 18 unforced errors, 25 fewer than Cibulkova. "I said, 'Of course, there's always a place for Mr. Trump."'