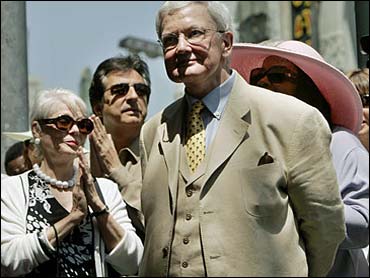 Film critic Roger Ebert, who has battled cancer in recent years, was in serious but stable condition Sunday evening following an emergency operation to repair complications from a previous cancer surgery.

Ebert, famous for his "thumbs up" or "thumbs down" critiques, was doing well Sunday night, his family said in a statement.

"I am pleased to report that the doctors say Roger is stable and responding well to the recent surgery," said his wife, Chaz Ebert. "Roger and I are so grateful for your prayers and support but please give the big guy the space and time needed to recover until he is ready to use those thumbs again."

Chicago Sun-Times columnist Richard Roeper — co-host of the "Ebert and Roeper" movie review show — told the newspaper that Ebert's vital signs appeared to be good after the hours-long operation.

"Roger is a fighter, and I have every confidence and hope that he has thousands of movie reviews ahead of him," Roeper said.

Ebert had surgery June 16 to remove a cancerous growth on his salivary gland. He told Sun-Times columnist Robert Feder at the time that the condition was not life-threatening and he expected to make a full recovery.

About 8 p.m. Saturday, a blood vessel burst near the site of the operation, the Sun-Times reported Sunday on its Web site. A Northwestern Memorial Hospital spokeswoman declined to comment Sunday afternoon.

The 64-year-old has undergone cancer surgery three times before — once in 2002 to remove a malignant tumor on his thyroid gland and twice on his salivary gland the next year.

Ebert has been a film critic at the Chicago Sun-Times since 1967. He won the Pulitzer Prize for criticism in 1975, the same year he teamed up with Gene Siskel of the rival Chicago Tribune to launch their movie-review show. Siskel died in 1999.