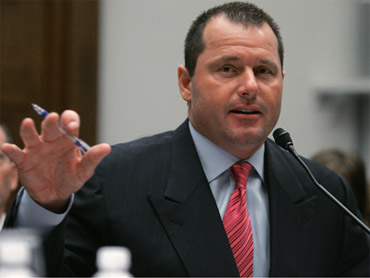 Roger Clemens was vehement: "Let me be clear. I have never taken steroids or HGH," he told a House committee in 2008. Now, instead of the Hall of Fame, baseball's seven-time Cy Young winner could go to prison after being indicted by a federal grand jury Thursday for allegedly lying to Congress.

The case writes a new chapter in one of baseball's worst scandals, the rampant use of performance-enhancing drugs in the 1990s and early 2000s, and leaves Clemens' legacy in jeopardy.

The six-count indictment alleges that Clemens obstructed a congressional inquiry with 15 different statements made under oath, including denials that he had ever used steroids or human growth hormone.

Former Rep. Tom Davis of Virginia, the top Republican on the House panel at the time of Clemens' testimony, called it "a self-inflicted wound."

Clemens had been prominently mentioned in the Mitchell Report, Major League Baseball's own accounting of its steroid problem, and he went to Capitol Hill on his own to clear his name.

"Clemens was not under subpoena. He came voluntarily," Davis said. "And I sat there in the office with (committee chairman) Henry Waxman and said, 'Whatever you do, don't lie."'

Clemens was sticking to his story Thursday. He insisted he was telling the truth, again denying any wrongdoing on or off the field.

"Roger is looking forward to his day in court," Clemens lawyer Rusty Hardin told a news conference. "He is happy this has finally happened. We have known for some time this was going to happen. We'll let everything get taken care of in court."

"I never took HGH or Steroids. And I did not lie to Congress," Clemens said on Twitter. "I look forward to challenging the Governments accusations, and hope people will keep an open mind until trial. I appreciate all the support I have been getting. I am happy to finally have my day in court."

Hardin said federal prosecutors made Clemens a plea offer but he rejected it. Hardin declined to comment on details of the proposed plea deal - which ordinarily involves admitting to a crime while avoiding the scenario of a multiple-count indictment as happened in the Clemens case.

Clemens faces a combined maximum sentence of 30 years in prison and a $1.5 million fine if convicted on all charges. However, under U.S. sentencing guidelines, he would probably face no more than 15 to 21 months in prison.

Clemens is just the latest superstar to be ensnared in baseball's steroid scandal. All-time home run king Barry Bonds is scheduled to go on trial in March on charges of lying to a federal grand jury when he said he never knowingly used performance-enhancing drugs. Slugger Mark McGwire admitted earlier this year to using steroids.

Hardin said that although many have argued that Clemens should simply admit he took steroids, "the problem is nobody ever talks about what he should have done if he didn't do it."

"And he didn't do it and he's adamant about that and always has been. Today is just another continuing part of that saga," Hardin said.

Clemens, who turned 48 this month, ranks ninth on the career list with 354 victories. He once was considered a certain first-ballot Hall of Famer, but getting in at all is now in question.

"In my opinion, he's a Hall of Famer. Period," said New York Yankees slugger Lance Berkman, who played with Clemens in Houston. "Whatever you want to say about the guy, he belongs in the Hall of Fame. In my opinion, legacy-wise, I guess that's up to - I mean, 200 years from now, who cares?

"But in the short term, I guess, he may have some things to address," Berkman said. "He's a big boy. He'll face up to whatever it is. But it doesn't change my opinion of him at all."

Yankees catcher Jorge Posada, who played with Clemens on two World Series championship teams, said he would back his former teammate.

"I'm going to support him and I'm going to be behind him and that's all I can say," Posada said.

MLB did not comment on the indictment. But many in the game saw it as further validation of the Mitchell Report, released in December 2007.

Clemens was singled out by name 82 times in the 409-page report, compiled by former Senate Majority Leader George Mitchell. Much of the information on Clemens came from his former trainer, Brian McNamee, once the Yankees' strength and conditioning coach.

Four days after the report was released, Clemens issued a categorical denial in a statement through his agent.

"I am disappointed that my 25 years in public life have apparently not earned me the benefit of the doubt, but I understand that Senator Mitchell's report has raised many serious questions. I plan to publicly answer all of those questions at the appropriate time in the appropriate way. I only ask that in the meantime people not rush to judgment," Clemens said.

Clemens and McNamee testified under oath at the 2008 hearing before a House committee and contradicted each other about whether the pitcher had used PEDs.

McNamee has said he injected Clemens more than a dozen times with steroids and HGH from 1998 to 2001. Clemens says McNamee was lying.

"As far as we're concerned, it's vindication," Earl Ward, one of McNamee's attorneys, said of the indictment.

Clemens' case was assigned to U.S. District Judge Reggie Walton, who presided over the perjury and obstruction trial of Vice President Dick Cheney's former chief of staff, I. Lewis "Scooter" Libby. No date was set for Clemens' initial court appearance.

In his defiant testimony to the House Oversight and Government Reform Committee, Clemens said, "I've been accused of something I'm not guilty of."

Longtime Clemens friend and teammate Andy Pettitte told congressional investigators that Clemens confided to him that he had used HGH.

"I believe Andy has misheard" the conversation, Clemens responded. He said he had simply mentioned to Pettitte a TV show about three older men who used HGH to get back their quality of life.

Pettitte was taking part in a charity event after New York's 11-5 win over Detroit at Yankee Stadium on Thursday and wasn't immediately commenting, the team said.

Clemens was an 11-time All-Star. During a 23-year career that ended in 2007, he played for the Boston Red Sox, the Toronto Blue Jays, the Yankees and the Houston Astros and struck out 4,672 with a lifetime 3.12 ERA.

The Clemens matter was the second referral the congressional committee made to the Justice Department. The other involved Miguel Tejada, who pleaded guilty to making misleading statements to committee investigators in 2005 regarding his knowledge of performance-enhancing drugs.

"The indictment of Roger Clemens comes as no surprise to me," said Victor Conte, founder of the Bay Area Laboratory Co-Operative, the center of a drug scandal that enveloped Bonds and other star athletes.

Glor reports Clemens was always an uncompromising, intimidating power pitcher. He brushed batters back and he argued with umpires and he never apologized for it. He handled this case the same way: keep pushing - deny, deny, deny. In the end he wasn't playing baseball, of course; he was testifying before Congress. And in the words of a spokesperson for the House Oversight and Government Reform Committee today: "There is no mechanism to justify lying to Congress."

The pitcher gave an exclusive interview to 60 Minutes correspondent Mike Wallace in 2008, where he vehemently mainatained his trainer only injected him with legal drugs.