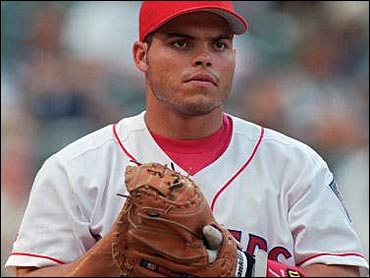 Detroit Tigers catcher Ivan Rodriguez denied ever using steroids, saying he was "in shock" over allegations made by his former Texas Rangers teammate, Jose Canseco, in an upcoming book.

In his book, Canseco said he introduced Rodriguez, Rafael Palmeiro and Juan Gonzalez to steroids after being traded to Texas in 1992, the New York Daily News reported on Sunday.

"I'm in shock," Rodriguez told local El Nuevo Dia newspaper for Tuesday's editions. "He is saying things that aren't true, and it hurts me a lot that he would say things like that because I've always had a lot of respect for him, and I've even helped him many times when things weren't going well for him."

Canseco's book, "Juiced: Wild Times, Rampant 'Roids, Smash Hits, and How Baseball Got Big," was scheduled for release by Regan Books on Feb. 21. Company spokeswoman Jennifer Suitor told The New York Times that the book's release was moved up a week to Feb. 14.

Canseco, who has refused to publicly discuss the book or what it contains, told the Times he would address the media after the book is released.

Rodriguez, the 1999 American League Most Valuable Player, insisted he has "never needed" steroids.

"I'm not a homerunner," the 14-year Major League veteran said. "What was I going to use that for? To keep hitting doubles?

Gonzalez, also of Puerto Rico, and Palmeiro, a Cuban who now plays for Baltimore, also have denied using steroids.

In his book, Canseco said U.S. President George W. Bush, the Rangers' managing partner at the time, must have known about the drugs. White House Press Secretary Scott McClellan said Monday that Bush was not aware of steroids use while he was a team executive.