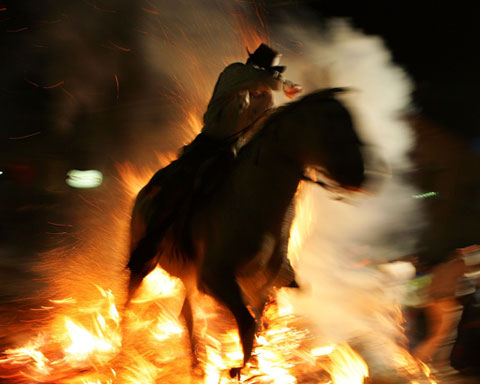 Dennis Rodman has stayed out way past his bedtime, lost his car keys and gone on a two-day birthday bender that might have killed lesser men.

So what's his excuse for skipping practice this time? Abducted by aliens?

Oh, that's right, this is Dennis Rodman. Hanging out with aliens probably would be a come down from the everyday life of the tattooed, multihued poster boy for bad behavior.

"He's going to come to practice tomorrow hopefully and have some lame excuse," Scottie Pippen said. "We know what Dennis is like, we know what type of player he is. He's the guy that does what he wants and all you can do is deal with it."

Leave it to Rodman to find a way to upstage the Chicago Bulls and their 42-point victory over the Utah Jazzin Game 3 of the NBA Finals. Rodman, who has as many mood swings as he has hair colors, was fined $10,000 Monday by the NBA for blowing off a mandatory question-and-answer session.

He also skipped Chicago's film session, which probably means a fine by the Bulls, too.

On Monday night, he was seen with Hulk Hogan attending a wrestling match in Auburn Hills, Mich. He declined to talk to a reporter at the match, staying in a luxury box at The Palace.

He was with World Championship Wrestling president Eric Bischoff and wrestlers Hulk Hogan, Bret Hart and a 7-foot-4, 510-pound grappler billed as the "The Giant," who defended Rodman's absence from the Bulls.

"The beautiful thing about Dennis is that he's the epitome of a free spirit," said The Giant, whose real name is Paul Wight II. "If the Bulls try to control him from doing things like this, it would be like cutting off Samson's hair."

"We couldn't have a society that acted like Dennis," coach Phil Jackson said. "There would be nobody having lanes in the freeway, you couldn't queue up anywhere and get in line. You'd have to be disorderly. Dennis is not a normal person in our society, but he's great in what he does here."

Which is why the Bulls are willing to overlook Rodman's extensive list of antics. He's the best rebounder the NBA's ever had. At 37, he's still good enough to win a seventh consecutive rebounding title.

And for some twisted reason, he gives the Bulls a spark that no one can duplicate.

"With Dennis comes a lot of baggage," Michael Jordan said. "We just have to carry it and we have to accept it."

Accepting someone's quirks is one thing. But Rodman's behavior is so outlandish it would test the patience of the serenest of people, no matter how much Zen Buddhism they practice.

An incentive-laden contract kept him in check for most of the season. He was sent home from a game in New Jersey after saying out too late partying, and he lost his starting job for two games in February after he blew off two practices, but at least he didn't head-butt anyone or kick any cameramen.

But there's something about the playoffs that brings out the worst in Rodman. Just ask the Mormons, whom Rodman insulted last year in a profanity-laced diatribe.

This year's meltdown started innocently enough. He began showing up late for games, waltzing into the locker room an hour before tipoff with a smirk on his face. Then, when Jackson started Toni Kukoc instead of Rodman, he disappeared to the locker room at the start of each half, forcing Jackson to send an assistant trainer to find him.

That won't happen, Jackson said. The rest of the Bulls understand that Rodman is just being Rodman. He doesn't like talking to the media, and he doesn't mind shelling out a few thousand dollars to avoid it.

The Bulls will just wait for Rodman to show up and move on from there.

"If he does his job in the game, it doesn't really matter to me what he does," Jud Buechler said. "We've dealt with this for the last three years. There is no shock, you can't shock us anymore. This team has seen way too much."