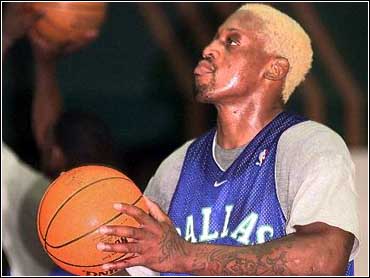 From wrestling to acting to getting arrested, Dennis Rodman has done a lot since his last NBA game 10 months ago. Playing basketball, however, wasn't high on his things-to-do list.

Yet on Tuesday Rodman showed his new Dallas Mavericks teammates that, despite the layoff, he can still rebound and defend, which is exactly what he's been hired to do.

"He walked into our practice and just proved that he knows how to play when to set picks, when to move the ball," coach-general manager Don Nelson said. "He was very impressive considering he hasn't played for a year."

The currently blonde-haired forward will get his first real test Wednesday night at home against Seattle. Rodman won't start, but he's likely to play about 15 minutes.

Although Rodman grew up in Dallas and still has family and friends in the area, he's changed more than just his hair color since the last time he called the city home.

Back then, Rodman was a skinny teen-ager who didn't play high school basketball and once worked as a janitor at Dallas-Fort Worth International Airport.

Now, he's a 38-year-old multimillionaire known as much for outrageous antics such as cross-dressing and multiple body piercings as for winning seven rebounding titles and five NBA championships.

"I don't think the hometown part has any affect on my play or anything about Dennis Rodman," he said. "I just go out there to have a good time, I work hard and I give people what they want."

Rodman played 23 games for the Los Angeles Lakers last February through April, then was cut when team officials ran out of patience with his high-maintenance lifestyle.

He yearned to return to the Lakers this season because he wanted to play for their new coach, Phil Jackson, who kept Rodman on a long leash in Chicago. But the team wasn't interested. Neither was anyone else.

When the long-suffering Mavs began wooing him a few weeks ago, it seemed like they had nothing to lose and plenty of free publicity to gain.

But Dallas has won eight of its last 10, the team's hottest streak since Jason Kidd's rookie season five years ago. Now, adding Rodman's volatile personality could threaten whatever chemistry the Mavericks have going, and he's always one skipped practice or kicked cameraman from becoming a major distraction.

"We've just got to hope he can help us on the court and be happy with that," All-Star swingman Michael Finley said.

An unwritten part of Rodman's bargain-basemet deal is that he can pedal instead of practice, something Nelson insists the other players don't mind.

But there was no stationary bicycle parked alongside the practice court Tuesday as Rodman participated in 3-on-3, 4-on-4 and 5-on-5 drills. Nelson said Rodman would continue practicing until he's comfortable playing alongside his new teammates.

The workout was closed to the media. When it opened, Rodman shot free throws at one end of the court with assistant coach Kiki Vandeweghe. He hit about 20 in a row at one point, but also had a stretch of four misses in five tries.

Because offense is so little of Rodman's game, getting the rust off should be easier for him than someone who relies on touch passes or long-range jumpers.

"His style is based on hustle and smarts and he still has both those," Vandeweghe said. "We saw in practice he got a lot of rebounds just by hustling and knowing where the ball was going to come off."

The Worm's homecoming has been a PR boom. The Mavericks dominate the local sports spotlight and even the national media is paying attention to the team for something other than goofy mistakes.

"We've been playing well, but I don't think that in itself is enough to create excitement," Nelson said. "But along with somebody like Dennis Rodman joining our team, I think the excitement is going to be back."