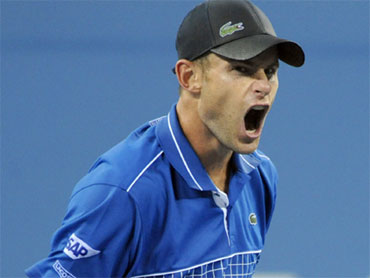 The scene was simply scary: Victoria Azarenka, a 21-year-old on the rise in the WTA rankings, paused about a half-hour into her second-round match Wednesday at the U.S. Open, then staggered, stumbled and collapsed to the court.

Azarenka, seeded 10th in the Grand Slam tournament, rolled over to rest her head on her arm, and a trainer rushed over. Someone covered Azarenka's legs with a white towel. She retired from the match, eventually was helped into a wheelchair, her yellow visor askew atop her head, then taken to a hospital, where tests showed she had a mild concussion.

As a record-breaking summer suffocates New York, the temperature in Flushing Meadows headed into the 90s for a third consecutive day, and the mercury topped 100 degrees on court. But tournament referee Brian Early said Azarenka's problem did "not seem to be primarily a heat-related illness."

Indeed, Azarenka herself later revealed she fell in the gym while warming up before the match, banging her head and arm in the gym.

"I was checked by the medical team before I went on court and they were courtside for monitoring. I felt worse as the match went on, having a headache and feeling dizzy," said Azarenka, who is from Belarus but lives part of the year in Scottsdale, Ariz., with the family of NHL goalie Nikolai Khabibulin, someone she considers a mentor.

While that was the biggest news of the morning, there were surprises on the scoreboard throughout Day 3, including more than 12 hours later, when 2003 U.S. Open champion Andy Roddick bowed out in the second round with a 3-6, 7-5, 6-3, 7-6 (4) loss to 44th-ranked Janko Tipsarevic at night.

Roddick had difficulty dealing with Tipsarevic's serve and go-for-broke groundstrokes, but also got into a lengthy argument with a lineswoman over a foot-fault call in the third set. Roddick asked the official which foot crossed the baseline, and she told him it was his right foot.

He continued berating the official between points, making a joke about "1-800-Rent-a-Ref."

A TV replay showed Roddick did commit a foot fault — but with his left foot.

Harrison, who is based in Bradenton, Fla., is the first U.S. male teen to beat a top-20 opponent at any Grand Slam tournament since a 19-year-old Roddick knocked off No. 11 Alex Corretja at the 2001 U.S. Open.

You don't have to go nearly as far back to find a female teen from the United States who pulled off that sort of upset, of course: Melanie Oudin of Marietta, Ga., was 17 a year ago when she reached the U.S. Open quarterfinals by beating two top-20 players.

"Definitely disappointing," Oudin said. "I still have, hopefully, like, 10 more years in my career, hopefully 10 more U.S. Opens ahead of me. So I'll definitely be looking forward again to next year."

No. 13 Marion Bartoli, No. 28 Alisa Kleybanova and No. 32 Tsvetana Pironkova also lost. Pironkova was ranked only 82nd in June, when she shocked Venus Williams in the quarterfinals, and they could have met in the third round in New York. But Pironkova bowed out in straight sets against qualifier Mandy Minella of Luxembourg, who gets to face Williams instead.

Marino actually led 3-1 in the tiebreaker, before Williams took the next six straight points to steal the opening set.

"She started returning better, serving bombs. I think she definitely upped her level," Marino said. "I did notice at one point that she started to grunt pretty loudly. And it's like, 'Whoa, she's getting serious here."'

Azarenka began wobbling early in her match against Gisela Dulko of Argentina, taking extra time between points and wincing occasionally, clearly in distress. Azarenka said she "started having trouble seeing and felt weak."

She is an up-and-comer on tour, part of a group of young players seen as potential future Grand Slam champions. Azarenka beat Maria Sharapova in the final of a hard-court tournament in California last month and pushed Serena Williams to three sets before losing in the Australian Open quarterfinals in January.

Against Serena Williams in the fourth round of the 2009 Australian Open, Azarenka stopped in the second set, dizzy and in tears, and blamed a virus.

The match was halted with Azarenka trailing Dulko 5-1.

"It was terrible. It's not nice to see someone feeling bad, not nice to win a match this way. I hope she feels OK now," said Dulko, who walked around the net to check on the prone Azarenka. "I was worried for her."

Winners included No. 4-seeded Andy Murray, the 2008 runner-up, who said he wore a hat during a match for the first time in four or five years because of the heat; No. 12 Mikhail Youzhny; No. 14 Nicolas Almagro; No. 18 John Isner, best known for his all-sorts-of-records-smashing Wimbledon marathon victory that ended 70-68 in the fifth set; and No. 20 Sam Querrey, who beat NCAA singles champion Bradley Klahn of Stanford 6-3, 4-6, 7-5, 6-4 in an all-American matchup.

At night, defending champion Kim Clijsters reached the third round by beating 201st-ranked qualifier Sally Peers of Australia 6-2, 6-1, before Roddick and Tipsarevic followed them into Arthur Ashe Stadium for a match that finished right around midnight.